I’m trying to understand the mechanics of the LSTM in Pytorch and came across something that I believe has been asked & answered before but I have a follow-up.

A simple example is pasted below. I expected the final output to be a concatenation of the h_n contents.

But it seems like only the first half matches. From related posts, I see that I’m probably looking at the “first hidden state of the reverse sequence”.

My question : “Is there a way for me to access the last hidden state of the reverse sequence to verify that my ouput[5] is the concatenation of the hidden states?” 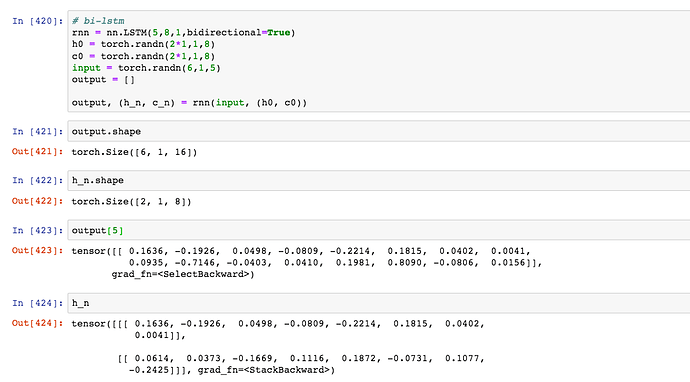 Have a look at @vdw’s great visualization and explanation regarding the hidden state and output of an rnn: post.

While he explains the usage for bidirectional=False, we can use the docs to separate the directions and compare the output to the hidden state:

I wondered the same thing in a previous post of mine. As @ptrblck clarified in his answer, the last states of the forward and backward pass are indeed found on the “opposite” ends of output.

This was very helpful @ptrblck & @vdw !

So the output is basically the collection of the hidden states’ step-wise. I get it now.

because using the output[-1] is “forward_final_hidden_layer, backward_initial_hidden_layer”, which is incorrect to use as a sentence representation, correct?

Yes, I would strongly assume so, since you only get the true/full sentence embedding after the last step.

[…] using the output[-1] is “forward_final_hidden_layer, backward_initial_hidden_layer”, which is incorrect to use as a sentence representation, correct?

Yes, at least the way PyTorch implements it.

An alternative, I have occasionally stumbled up it, is to calculate the average or maximum over the whole output; please see the forward method of a simple RNN-based classifier I used for testing the effects. It obviously will work (since the dimensions check out) and even train well, but I’m pretty sure I saw any improvements since I stopped using it. Fell free to try, though. I might work for you setting

However, I still do not get how you were able to tell ‘the output[-1] is “forward_final_hidden_layer, backward_initial_hidden_layer”’. I tried to find this information on the document, but I failed.

The issue is that in case of a BiLSTM, the notion of “last hidden state” gets a bit murky.

Take for example the sentence “there will be dragons”. And let’s assume you created your LSTM with batch_first=False. Somewhere in your forward() method you have

hidden does not have any sequence dimension and will contain the last hidden state of the forward direction (part of output[-1]) and the last hidden state of the backward direction (part of output[0]). Depending on your exact task, using hidden for the next layers is usually the right way to go. If you use output[-1] you basically loose all the information from the backward pass since you use the hidden state after only one word and not the while sequence.