Hi all, I am confused about the output of LSTM when the bidirectional is True. Like:

The document says the h_n in LSTM output like this:

I am wondering if I set the bidirectional as True, is h_n the concatenation of h_t of forward lstm and h_0 of backward lstm ?

Here is the structure: (from “Neural Architectures for Named Entity Recognition”) 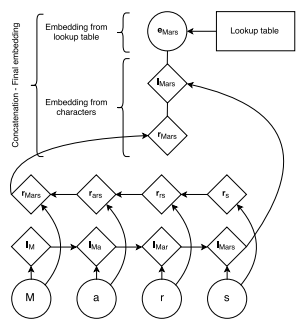 After several trials, I find the output hidden gives what I want. The returned hidden is the concatenation of h(t) of forward and h(0) of backward lstm. That is exactly what I want.