I have a DCGAN (code available here: https://github.com/Grubzerusernameisavailable/DCGAN-pytorch/blob/master/pytorch_gan.ipynb), but it has a big problem: it doesnt work. In the beginning if the generator is fed some random noise, outputs are also a uniform noise as expected, but at least they change with whatever we input in. But almost immidiately after training starts it falls into something that looks like a mode collapse, but worse: images not only stay almost completly identical no matter the input (they may have some variance, but it is imperceptible for me), but they also have no traits of original dataset (256 * 256 rgb living room images):
Here is how typical output looks (from one of the experiments i ran with reduced (64*64 RGB) resolution): 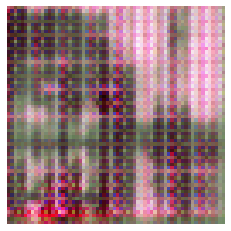 And loss from one of the runs, sampled each batch (graph looks kinda the same, no matter what i do): 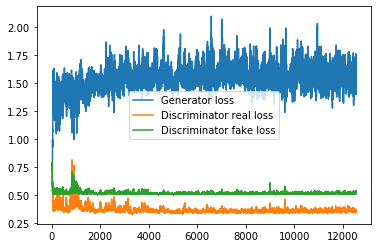 Things that i tried to fix it:

None of it worked. One behavior that i noticed is a “blobby” nature of some outputs, where output would typically have a blob of one color with a background of another color, and a high-res grid pattern overlayed on top of that, colors of which change in the “blob” and backgground

I am kinda new to ML community, and might be missing some key element, but this amount of absence of any change in behavior no matter what i do, is starting to drive me kinda crazy, help me please

Have you taken a look to DCGAN Pytorch tutorial ?

Even though i wrote my dcgan from another tutorial, yeah, i read this one too, verified that my training loop is ok, found a method for random weight initialization, and remembered that i should BachNorm2d my layers. Still didnt help though

Maybe the input are not normalized as the Generator output? ([-1,1] using tanh) .

done that, ported it from my MNIST tensorflow GAN as the first measure

I noticed when you plot the image you don’t do gen.eval(). This is important because of the BatchNorm. Also why using dropout with so low p? Have you tried with p=0.5 , or using BatchNorm in both generator and discriminator?

I thought that bad generator performance was due to weak discriminator, so i tried making it ‘stronger’ by reducing how much it forgets during training

Completly forgot about .eval, ill try that tomorrow, and Discriminator BatchNorm too, will post results here

Alright, i’ve done some tests, and results are as following:
on the same architecture as before, no changes using .eval before image sampling, though i kept using it since that is how i should’ve done it from the beginning

Also i’ve done three more tests: discriminator dropout 0.4, discriminator batchnorm, and both at the same time, here is how they look, results from:

Dropout 0.4 with no batchnorm 10 epochs: 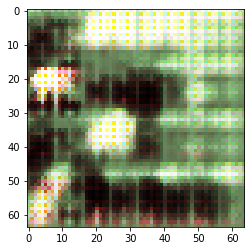 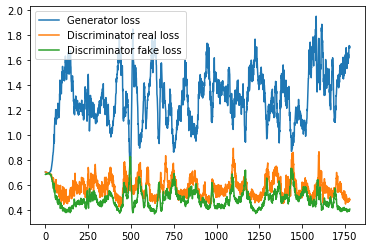 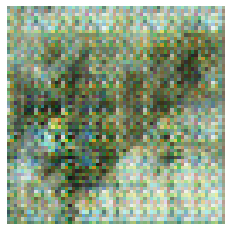 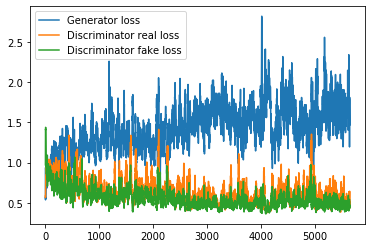 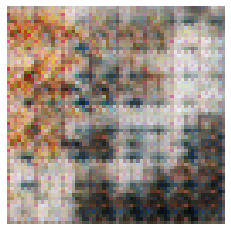 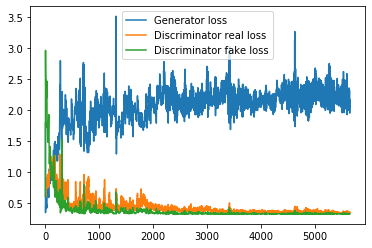 I feel like batchnorm with no dropout works the best, even at 10th epoch: 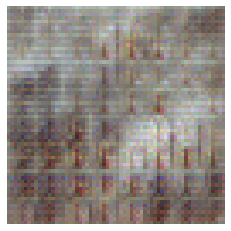 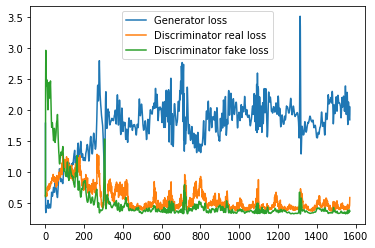 But the problem of mode collapse still remains unsolved. No matter the input, generator creates the same pictures (up to pixel-by-pixel similarity). Any remedeis for that? I’ve heard that Unrolled GANs solve this problem, but maybe there is something else? Also, i can see the problem of big repetitive patterns. Is this something similar to checkerboard artifacts that transpose layers produce, just carried over from earlier layers?

Gif from batchnorm only run

So, after some more testing, i came to a conclusion:

My model (and model from dcgan pytorch tutorial i switched to) did not have enough capacity for dataset i was using. After switching to CelebA dataset, model worked as is it was suppose to. My theory is that because of high variety of images in living room dataset, different environments, camera angles, etc. and low model capacity for this task, it was forced into creating blurry approximations of them, hardly capturing even a color scheme, and falling into mode collapse, since size of latent vector and model capacity were not big enough to capture all parameters that it needed.

In this tutorial: https://machinelearningmastery.com/practical-guide-to-gan-failure-modes/
Author decreases the size of latent vector from 100 to 1, which causes mode collapse.

Ideas to take with me to my other experiments:

Thanks to everyone who helped me, problem is solved