Difference between the 2 codes below (REINFORCE)

I was trying to implement the REINFORCE algorithm from scratch and somehow the policy was not improving at all. I will cut the details and will post the culprit part of the codes (mine vs code from pytorch examples). Can someone please tell me what is the difference between the codes below. The seeds and network is same

Code That Does Not Work

Code that Does Work
That can be found here

I have added a debugger and seen the policy_loss for both of the codes. Since the seed was same, the loss was consistent.

I’m not familiar with REINFORCE, but from the code snippet it looks like you shouldn’t re-wrap your policy_loss into a new Variable, as this will detach your computation graph.
Could you just skip the Variable creation and just perform the mul and sum operation?

Not related to the problem, but in the current stable release, Variables and tensors were merged besides a lot of other bug fixes and new features. Have a look at the website for the install instructions.

I have tried that as well, it does not work either. The code iterates very fast though. I think, something is disconnected from the computation graph. Is there a way to check that?

Thank you for the reply, both codes are exactly same outside this function

Have you monitored the model’s parameters using plain SGD for optimization? Do they change?

I am new to pytorch, I am not aware of how to do that.

Can you maybe post a bit more code or link a repository, so that we could have a look at your whole model?

yeah sure. Give me 5 mins

Hi, I have edited my code in the question. The correct code is also added in the edit. Thank you

so the gradients are None

The fact that there aren’t any grads is a strong hint towards my suggestion above. If I have some time tomorrow, I’ll try to get your code working

The following runs with pytorch 0.4 (note that there are no more variables needed since they have been merged with tensors in 0.4) . For lower versions you have to do some minor changes.

EDIT: Just noticed that the code is pretty similar to the one which is given as example in the pytorch repo. But I hope the explanations are helpful.

Thank you so much for the time you have taken out to write all the code and I appreciate it a lot. The question, I still have it is that why doesn’t my code calculates the gradients. Why the code written below works while they way i wrote didn’t especially when the policy loss is same for both of them. Thank you

multiply rewards with saved log_probs (tensors) to use their gradient path

ohhhhh. I got it. Thank you

So, I tried this code, the problem I am facing is that, when I run it on GPU, this code does not train at all. Can you please tell me that why it is behaving that way. I tried it on the CPU with of course, a different optimizer, with same seeds, it is giving me same answers which is good but on GPU, it does not work at all. Is there something I am missing? Shouldn’t be the result same since the seed is fixed? 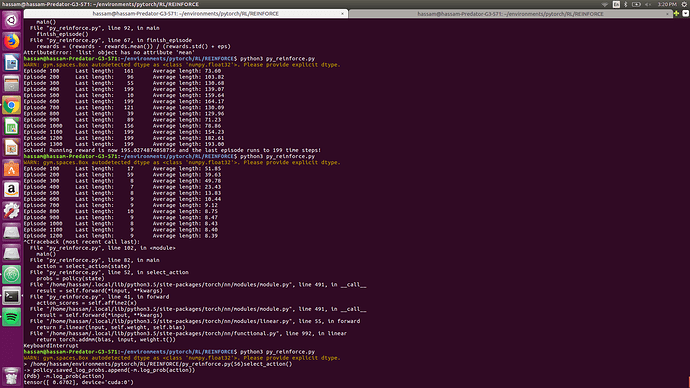 So you switched the optimizer between the CPU and the GPU version? Results with different optimizers are not exactly comparable. You should also note that the GPU is non-deterministic by default. You may switch that setting with

After importing and seeding pytorch (this will. Slow down your code a bit). Can you also try it with plain SGD (and the exactly same parameters) on GPU and CPU and post the results?

I have used same optimizer for both of the models. Let me try what you have suggested. Again thank you so much for your effort. I appreciate it a lot