How to extract features of an image from a trained model

I try examples/imagenet of pytorch. It is awesome and easy to train, but I wonder how can I forward an image and get the feature extraction result?
After I train with examples/imagenet/main.py, I get model as,
model_best.pth.tar
And I load this file with
model = torch.load('model_best.pth.tar')
which gives me a dict. How can I use forward method to get a feature (like fc7 layer’s output of Alexnet) of an image with this model?

18 Likes
Extracting and using features from a pretrained model
Is it possible to check each ouput of a layer in a nn.Sequential or nn.Module?
How to attach a network to part of an old network
Selecting/discarding specific blocks from resnet model
How to use a network with Batchnorm on eval mode as a feature extractor for a different network
How can i complete the task with .pth files?
apaszke (Adam Paszke) January 22, 2017, 10:03am #2

You can use the torchvision.models package, where you have functions for constructing various vision models, with an option of using pretrained weights. This:

will give you a nn.Module with downloaded weights.

To complement @apaszke reply, once you have a trained model, if you want to extract the result of an intermediate layer (say fc7 after the relu), you have a couple of possibilities.

You can either reconstruct the classifier once the model was instantiated, as in the following example:

Or, if instead you want to extract other parts of the model, you might need to recreate the model structure, and reusing the parts of the pre-trained model in the new model.

89 Likes
How to get separate conv feature map from pretrained ResNet?
How to return the features of vgg fc1 layer?
How to extract features of an image from a pretrained model
Module.children() vs Module.modules()
How to perform finetuning in Pytorch?
Visualizing different layers of neural network
Question on extracting intermediate features from pretrained models
How to get a intermediate value from nn.Sequential?
How to set batch size when extracting feature using pretained models
Given input size: (512x1x1). Calculated output size: (512x0x0). Output size is too small
big_tree January 23, 2017, 1:49am #4

Is there a way to get values from multiple layers with one forward pass (for neural style transfer etc.)?

In Tensorflow it would be along the lines of

@kpar Yes, it’s possible and very easy in PyTorch. All you need to do is to return the multiple outputs that you want to retrieve.
Here is an example

Is there a convenient way to fetch the intermediate values when the forward behavior is defined by nn.Sequential()? It seems like right now the only way to compose multiple responses would be to split off all the individual layers and forward the values manually in forward().

Essentially what I want to do is take an existing network (e.g. VGG) and just pick some responses of some layers (conv1_1, pool1, pool2, etc.) and concatenate them into a feature vector.

You could write your own sequential version that keeps track of all intermediate results in a list. Something like

@kpar, another way to extract features layer by layer of a pre-existing neural network is to recreate a new network, adding one by one all the layers from the pre-trained network, plus some “transparent layers” that just extract features:

@alexis-jacq I wouldn’t recommend that. It’s better to keep your models stateless i.e. not hold any of the intermediate states. Otherwise, if you don’t pay enough attention to them, you might end up with problems when you’ll have references to the graphs you don’t need, and they will be only taking up memory.

If you really want to do something like that, I’d recommend this:

This unfortunately uses a private member _modules, but I don’t expect it to change in the near future, and we’ll probably expose an API for iterating over modules with names soon.

Otherwise, if you don’t pay enough attention to them, you might end up with problems when you’ll have references to the graphs you don’t need, and they will be only taking up memory.

Wow! good to know that… Thanks!

That would be really useful!

Hmm… all is well for simple networks, like AlexNet.
What if I want to use something a bit more fancy, say ResNet-18, and wish to extract some intermediate representation?
I can fetch the model with torchvision.models.resnet18(pretrained=True). I think the network graph can be reconstructed by forwarding a Variable and checking who’s the parent, but I wouldn’t be sure about how to do this not by hand.
Moreover I think the tuple attribute classes (mapping output class to label) is missing.

Can I register a hook to a specific child, and have it return its current output? In the old Torch I would have model:get(myModuleIndex).output, or a more nested combination, and got myModuleIndex from visual inspection of the model structure (using the __tostring() metamethod).

How do we hack these models?

OK, I’ve managed to display the graph with from visualize import make_dot (here’s visualize).
Now how can I reach inside the graph? 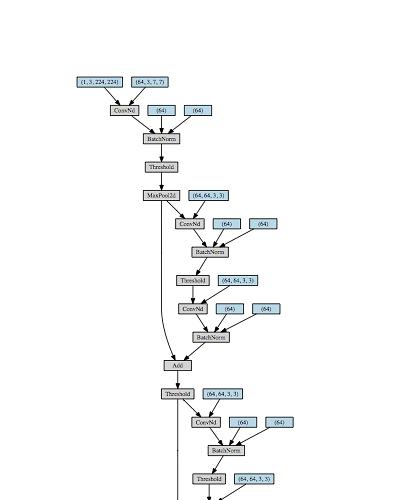 So, let’s call the output h_x (which is $h_\theta(x)$).
So, I can peek at my embedding if I do the following dirty sequence of operations (which I guess are not recommended).

And embedding should correspond to the output of the last Threshold, if I’m not mistaken. Still, this is not generally applicable to every functional block, since not all block cache the input.
So, I’m still after a better way to dissect these nets…

Why do you want to inspect the graph? A new instance is going to be created at every forward.

You can register a hook on any Variable using the register_hook method, or on any module - register_backward_hook.

What are you trying to do, and why doesn’t the FeatureExtractor I shown above work for that?

Hmm, I thought that the FeatureExtractor you showed above can deal only with sequential models.
The loop

passes forward the output of each submodule's module, in a sequential manner, no?
Maybe I don’t understand what the method _modules() provides…

Yeah it does, but you can easily adapt it to other network topologies by replacing self.submodule with some other reference. resnet18 is sequential if you only want to inspect the maps between the blocks.

I think @Atcold meant that FeatureExtractor only works for networks with submodules that are the layers. The problem is not solved for networks with “sub-sub-modules” like in resnet18 structure, maybe somewhere we need a recursive pass, in order to access the “leaf-modules” of the graph…

Thank you @alexis-jacq for addressing my specific issue.
I’ve been suggested to use nn.Module.register_forward_hook() to perform this job.
I still have to figure out a smart way to get the reference to specific nn.Modules within a graph, but I think I can play with the visualisation script I posted above.

@albanD, this is why I think the graph integration with your TensorBoard client is essential.
So that I can click around and add some hooks on the fly.

@Atcold The issue with adding graph integration to Crayon is that we need to essentially write an interface between whatever TensorBoard reads and PyTorch (or Torch, Theano, CNTK, etc.).

We managed to quickly write what we currently have because getting TensorBoard to take 2d values / histograms was relatively straightforward, however adding integration for more complex data types is not a one-day job.

After the ICML deadline we’ll give it a look.