@alexis-jacq This approximation is not close to the true distribution.

Well it seems ok with plots: 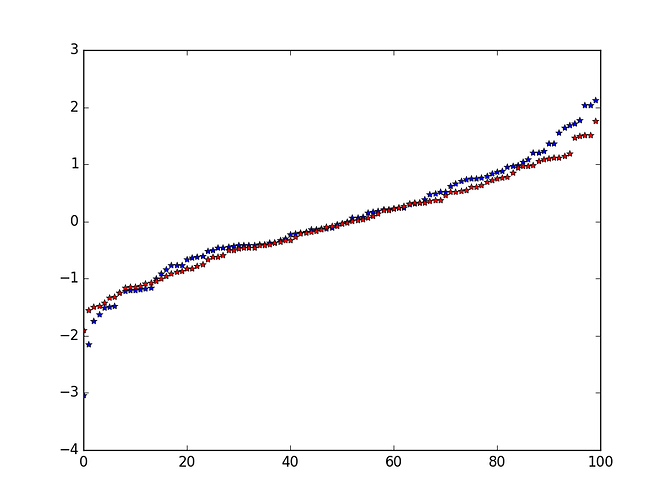 Well, the method confines the random variables to a circle when you want a square [Edit: The square would not work either as it has the wrong marginals, too. One needs the full “other dimension” for each coordinate]. It probably works just fine for the initialisation heuristic, but it is far from general purpose.
(Interestingly, a similar transformation to polar coordinates is the easiest way I know to compute the normalisation constant in the normal transform. If you could apply it to squares you would get a closed form for the normal CDF.)

@alexis-jacq I haven’t looked at the paper. But from my simulation, the sampled points are not following the true truncated normal distribution, 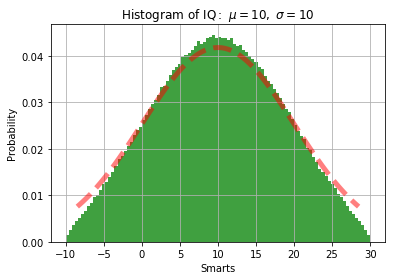 The red line is the pdf given by scipy.stats.truncnorm

If you can do with an approximation, torch.fmod(torch.randn(size),2) might be easiest.
It moves more of the cut-off mass to the center than to the boundaries, but at least the good samples stay where they belong… 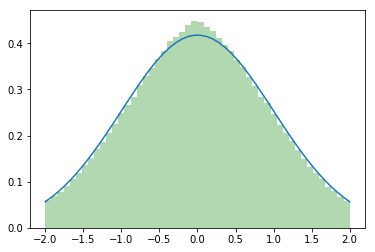 Wow, and your approximation takes one line!

So it looks like you take all the element over 2 and put them close to the mean, like in a snake game, and that’s why you have still too many people close to the mean. And it seems that the worst case comes with variance = 1. I would worth to write down the mathematics, to see how far we are from a Gaussian with both methods

Well, I think one of the things is that your sketch seems different from the usual definition of truncated Gaussian.
So what the .fmod in sampling does in terms of pdf is to sum the pdf over all x+sign(x)*cutoff*i | i=0,1,2,… . If the shape of pdf in [cutoff*i, cutoff*(i+1)] were proportional to [0,cutoff], this would be exact. As it is falls of much more quickly than proportional (a 3 std event conditional on the magnitude being at least 2 std is much less likely than a 1 std event). This is why summation puts too much mass in the center. With a smaller cutoff, the pdf in [-cutoff,cutoff] becomes flatter (closer to uniform) and thus the error is more pronounced. And this would further increase if you cut of at less than 1 std, but at some point you might just use a uniform distribution anyway. Even at 1 you could use a cutoff of 2/3 (or so) and then multiply the sample by 3/2 to approximate the truncated normal better (i.e. torch.fmod(torch.randn(size),2/3)*3/2).

If you now restrict R to R <= c, and take the pdf of X close to c, you have only very little of the total mass along the vertical (Y-coordinate) lies in the disc R<=c. This is why the “restricted BM” distribution has the density going to 0 as X approaches c.

But then I would be surprised if the initialisation heuristic broke down on with a simple approximation.

Ok thanks, now I understand better. So, close to x= 0, all samples should be accepted, since cos(U_2) is small, but with my approach, I still multiply by a restricted R and I make it even smaller. That explains the plot of @ruotianluo where I pass over expected density close to the mean.

It was too beautiful to work…

Once again, I should be more careful when emotions mix with mathematics…

Coming back to this thread after one year.

One simple approximated implementation for truncated_normal to 2*std.

Hi! Does it implement same thing as https://www.tensorflow.org/api_docs/python/tf/truncated_normal ?

Here is a simpler way to sample values from truncated normal distribution.

Thanks @ruotianluo.
I confirmed that your function is equivalent to scipy truncnorm.

if anyone wants reproduce:

The Tensorflow implementation of truncated_normal can be found on GitHub and references https://people.sc.fsu.edu/~jburkardt/presentations/truncated_normal.pdf (see page 24) there.

In case anyone needs a truncated normal distribution class, implementing the torch.distributions.Distribution interface, I put together one here: https://github.com/toshas/torch_truncnorm

Hello @anton, Thanks for posting your take on this. The class was very intuitive to use. But I found that when supplied a value outside of [a,b], log_prob does not give -inf. For example, a distribution with a=0, b=inf, loc=0, scale=1, log_prob(-1) gives -0.7. might be worth looking into.

I admit, this is not the most efficient way of doing it but it is re-drawing the values rather than clipping them as it is described in the tf specification (“values more than two standard deviations from the mean are discarded and re-drawn”)

I am using it like this m.weight.data = truncated_normal(m.weight.data) to initialize my weights. It is convenient in my case

Description as given Here:

It seems torch.nn.init.trunc_normal_ does not appear in the documentation of TORCH.NN.INIT, so I am a little confused whether it is stable version of this method?