I am running a Distributed Data Parallel (DDP) job on a single node. The node has 10 GPUs, but I’m using only 4 of them. The cluster is powered by slurm, and I use sbatch exp.sh to submit the job, where the exp.sh is as follows:

In the main.py (and other .py files it calls), I have set necessary environmental variables and created communication between workers:

The job seems to run smoothly. Then I login to that node, and type nvidia-smi. I get 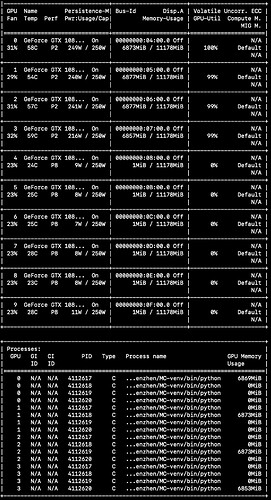 I also tried on other nodes, some with better GPUs and network connections. The above observation is not reproducible. Sometimes, I do get 1 process for each GPU instead.

Can anyone give some insights on what’s happenning?