Assume we have two nodes: node-A and node-B, each has 4gpus(i.e. ngpu_per_node=4). We set args.batch_size = 256 on each node, means that we want each node process 256 images in each forward.

(1) If we use DistributedDataparallel with 1gpu-per-process mode, shall we manually divide the batchsize by ngpu_per_node in torch.utils.data.DataLoader : torch.utils.data.DataLoader(batch_size = args.batch_size / 4)(the way used in pytorch-imagenet-official-example). In my original opinion, I think DistributedSampler can handle such thing, because we have passed world_size and rank to DistributedSampler. . If I was wrong, please point it out, thanks!

(2) If dividing the batchsize by ngpu_per_node is a correct way, I wonder what will happen if we do not that.

(2) If dividing the batchsize by ngpu_per_node is a correct way, I wonder what will happen if we do not that.

However, DDP does divide the gradients by the world_size by default code. So, when configuring learning rate, you only need to consider the batch_size for a single DDP instance.

Another question is if we do not divide batch-size by 8, the total images processed in one epoch will be the same as usual or eight times?

Another question is if we do not divide batch-size by 8, the total images processed in one epoch will be the same as usual or eight times?

The total number of images processed will be 8 times, because each DDP instance/process will process batch_size images.

It should be 1x lr. Because DDP calculates the average instead of sum of all local gradients. Let’s use some number to explain this. Assuming every image leads to a torch.ones_like(param) gradient for each parameter.

According to the discuss in Is average the correct way for the gradient in DistributedDataParallel, I think we should set 8×lr. I will state my reason under 1 node, 8gpus, local-batch=64(images processed by one gpu each iteration) scenario:
(1) Let us consider a batch images (batch-size=512), in DataParallel scenario, a complete forward-backforwad pipeline is:

So the finally [512, C] outputs are the same as computed on one gpu. So the learning rate here shall be set as 8×lr to keep same as 512 batchsize in one-gpu-one-node scenarior.

(2) Secondly, when DistributedDataparallel is used, the pipeline is

I do not know if I understand DistributedDataparallel in a right way. Please let me know if there has any wrong.

I agree with all your analysis on the magnitude of the gradients, and I agree that it depends on the loss function. But even with MSE loss fn, it can lead to different conclusions:

After reading your analysis, I realized that, with MSE loss fn, the discussion is mostly irrelevant to DDP. The question would then be, if I increase batch size by k, how should I adjust the learning rate, which is an open question.

Is it correct that when local batch-size is 64 (i.e. torch.utils.data.DataLoader(batch_size=64) and torch.utils.data.distributed.DistributedSampler() is used), and there are N processes totally in ddp (N processes distirbute in one node or more than one node), the forward-backward process is similar to the forward-backward process in 1-gpu-1-node using 64×N batch-size inputs?

For SGD this https://arxiv.org/abs/1706.02677 paper suggest When the minibatch size is multiplied by k, multiply the learning rate by k.

For my better understanding, @mrshenli - can you please answer?

Suppose we have 32*8 images in the dataset, and the batch size is 32. We want to train the model for 1 epoch only. Now consider following 3 scenarios. Note that we use same LR and optimizer function in all three cases below.

(1) Single Node - Single GPU: In this case, one epoch will require 8 steps to execute i.e. in each step, 32 images will be processed. The gradient will be calculated and applied 8 times. The model parameters will get updated 8 times.

(2) Single Node - Multiple GPU using DataParallel: Suppose we use 8 GPUs. In this case, one epoch will still require 8 steps to execute i.e. in each step, 32 images will be processed (albeit each GPU will process only 4 images and then the gradients will be summed over). The gradient will be calculated and applied 8 times. The model parameters will get updated 8 times.

(3) Single Node - Multiple GPU using DistributedDataParallel: Suppose we use 8 GPUs. In this case, one epoch will require just 1 step to execute as in each step 32*8 images will be processed. However, this also means that the gradient will be calculated and applied only 1 time. And consequently, the model parameters will get updated just 1 time. So, in order to get similar results as previous two points (#1 and #2 above), we will have to execute 8 epochs instead of 1, as gradients are averaged in the backward function and hence effective weight updates are almost similar in scenario 3 and those in scenarios 1 and 2 above.

Is this understanding correct?

@ekurtic Thanks for quick response.

I am trying to find how is the gain in training time (without affecting accuracy as much) by using DistributedDataParallel. As per you, if I use batch size of 4, then yes the training will be faster. However in that case I will be using LR of batch size 32 for that of 4. Is this okay? And if I divide LR by 8, then I am effectively slowing down the training, and thus not gaining on training time. Am I missing something here?

From my understanding of how DDP works:
There are a few gains that result in better performance (faster training) with DDP. One of them is that in a DDP experiment, your model and optimizer are “replicated” on each GPU (before training starts; notice this happens only once). After that, each GPU will optimize your model independently and exchange gradients with other GPUs to ensure that optimization steps are the same at each GPU.
On the other side, DataParallel has to scatter input data from the main GPU, replicate your model on each GPU, do a forward pass, gather back all outputs to the main GPU to compute loss, then send back the results to each GPU so they can compute gradients of the model, and in the end, collect all those gradients on the main GPU to compute the optimization step. And all of this happens for each batch of input data. As you can see, in contrast to the DDP, there is a lot of communication, copying, synchronizing and so on.

Regarding the LR question:
If you use batch_size/num_GPUs = 32/8 = 4 as your batch size in DDP, then you don’t have to change the LR. It should be the same as the one in DataParallel with batch_size = 32, because the effective batch size that your model is working with is the same: 32. It’s just handled in a different way with DDP.

@ekurtic I agree with your description of advantages of DDP in terms of communication, copy, sync etc.

On the LR part, however, I am not sure. As per the discussion in this thread and few others, each gpu will individually process 4 images, loss will be calculated and then during backward function the gradients will be calculated individually first. Then DDP calculates the average (instead of sum) of all local gradients. This means that the gradient magnitude (the average value) is effectively in the near-range of that for batch size of 4, and not 32. So I am not sure whether LR of batchsize 4 should be applied or that of 32.

Loosely speaking this is why I think we don’t need to update LR if we ensure that the effective batch sizes are the same: 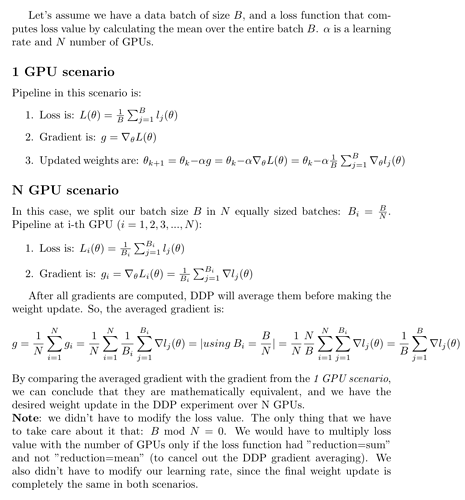 Thank you. This is very good explanation.

Thanks for this explanation, I wonder about the following sentence in the context of DDP:

If reduction=sum is used for computing the loss, it shouldn’t matter whether:

Yes, I think I agree with that. As long as your “main loss” is a sum of some terms (either via reduction=sum or it’s just composed out of a few different losses), you would have to multiply it somewhere to cancel out the 1/num_GPUs averaging that comes with DDP. From what I have seen so far, the most common thing is to just multiply loss prior to calling the backward() (your first suggestion). However, multiplying after should be fine too but you have to be careful and multiply before the optimizer.step() is called. I guess this second approach can then be achieved in two different ways: either by multiplying gradients (which could be slow) or by multiplying your learning_rate so that the final weight update has a proper scale.

However, multiplying after should be fine too but you have to be careful and multiply before the optimizer.step() is called. I guess this second approach can then be achieved in two different ways: either by multiplying gradients (which could be slow) or by multiplying your learning_rate so that the final weight update has a proper scale.

Good call, I will have to remember that! Thanks for your quick answer.

1 Like
How to scale/warmup the learning rate for large batch size?