I’ve adapted Harveyslash solution to siamese network to serve my purpose which is image class verification on custom dataset with transfer learning from network trained to classify this dataset. However I’m stuck on weird behaviour of the network. It’s been several days of diagnosing the problem, but it seems that I’m no closer to figuring it out. Maybe you’ll recognize what’s wrong.

So:
Aim: to train network to verify image class with Siamese architecture (so the network labels pair of images from different classes as dissimilar)

Data set: 5994 classes, 600 grey scale images on average for each class for classification training. For siamese training I’m choosing pairs with varying class number, or pairs per class number (ie. 100 classes, 100 pairs for every class). Pairs are made in a way that approx. half of them is simillar (same classes) and half is dissimilar (different classes). I am labeling similar classes as 0 and dissimilar as 1.

So first thing is that interestingly eval set scores waay batter than train set, and the second is that it seems that the network isn’t actually learning anything, but only scales the initial dissimilarity score. I’ve made a diagram with FAR and FRR which gave weird results: 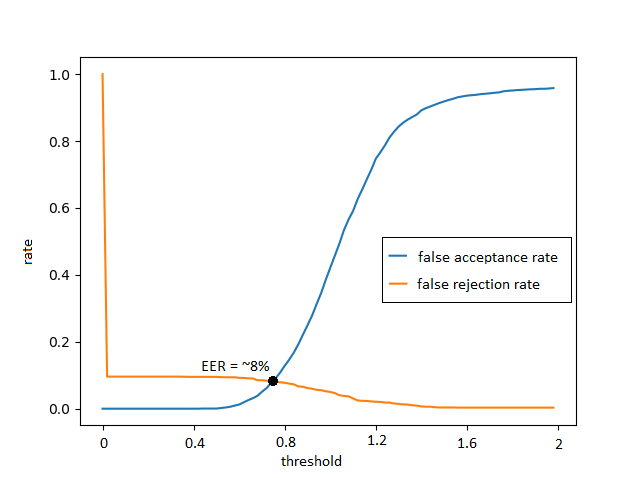 I’ve tried freezing all layers except new fc layer, changing learning rate from 0.1 to 0.00001,
What am I doing wrong?

So it turns out that the problem lies in pairwise_distance attribute keepdim. Networks learn normally with the attribute set to default (False). I’ll dig into that and write why when I’ll have a moment.