During the model training, I saved the parameters of the model in the following way:

After the training, I wanted to get a complete model, so I ran the following Python script:

However, when I used the complete model I had saved, I got it wrong. The Python script used and the error is as follows: 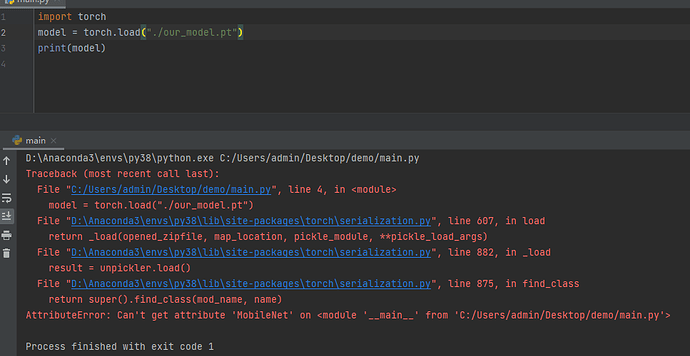 Thank you for your reply. I’m sure I’m using torch.save (net,path). The Python script I use to save the full model is as follows:

Ah, OK this would explain the error, as this method relies on the same file structure to be able to load the model again.
Check these docs which explain the disadvantage of saving the model object instead of its state_dict:

This save/load process uses the most intuitive syntax and involves the least amount of code. Saving a model in this way will save the entire module using Python’s pickle module. The disadvantage of this approach is that the serialized data is bound to the specific classes and the exact directory structure used when the model is saved. The reason for this is because pickle does not save the model class itself. Rather, it saves a path to the file containing the class, which is used during load time. Because of this, your code can break in various ways when used in other projects or after refactors.

Thank you very much. I think I get it. It just saves the path. So what do I do if I want to save a complete model and then use it in other projects?

I think you would need to copy/paste the entire source code with the stored model, but I have to admit not to use this approach as it can easily break and stick to saving the state_dicts instead.

Ok, I see. Thank you very much.

The common two approaches are mentioned in the linked doc and are basically:

You could also check the new torch.package module, which might be useful for your use case.

Ok, I see. Thank you for your help.