I need to implement an autoencoder network described in this article https://arxiv.org/pdf/1803.09065. The model is very simple. Contains only a hidden layer, which corresponds to a binarization layer of the input code. My whole difficulty is the activation function used in the hidden layer is non-differentiable and therefore the same weight matrix of the output layer is used to update the input layer. I would like to know how I can do an activation function in pytorch that does not need to be derived and that uses the output layer weight matrix to update the weights of the input layer. I will be very grateful if anyone can help me.

The network architecture follows below. 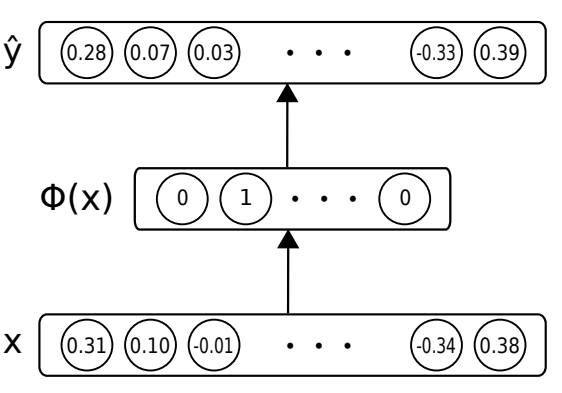 Could you explain it a bit?
Would you like to use the same gradients from the output layer on your input layer or copy the weights into the input layer after each update?

I would like to copy the weights into the input layer after each update of the output layer.

Thanks for the information!
In that case this code example might work.
I tried to come up with a similar model architecture, so I just used three linear layers and had to transpose the weight matrix since I used a “bottleneck” layer.
Also, I call x.detach() after the first linear layer to fake your behavior of the gradient loss in the input layer:

Let me know, if this helps or if I misunderstood your use case.

Thank you. I’ll test and say if it worked

It worked! Thank you! I have another question =]. I need to use a heaviside (step) function from the input to the hidden layer, instead of the relu function applied here (x = F.relu (self.fc1 (x))), so that the values of this layer are binary [0,1]. I’ve seen that it has the heaviside function in numpy, but it’s conflicting with the pytorch because of the type. Any idea?

What kind of type issue do you see?

RuntimeError: Can’t call numpy() on Variable that requires grad. Use var.detach().numpy() instead.

You could probably indeed detach the output of fc1, since you won’t calculate gradients for it.

Alternatively, you could also implement np.heaviside in PyTorch.

This worked \o/. Thank you

In the second term, W is the weight matrix and I is an identity matrix.
For both functions I have used MSELoss to implement. I tried the following.

It did not make any error, but I was in doubt if the code is actually doing what is described in the two functions of the model.

I’m not sure how W and the matrix norm are defined in the paper.
If they are using the Frobenius norm, you cannot use nn.MSELoss:

But as I said, I’m not familiar with the paper so I might misunderstand the notation.

Thanks for the explanation.
In the papers this notation is usually a norm L2 squared. In that case, I cannot use MSELoss, right?
Are there any other pytorch functions that I could use in this case?

Yes! In the paper, the authors did not specify the norm, but the L2 norm is usually used.

Sorry, I feel a little confused now. How would the norm be applied to the activation function?

I’m a bit confused, too.
Which activation function do you mean and what would you like to do with this function?

Based on the formula and code you’ve posted, it seems that l_reg is calculated based on the weight matrix of the last linear layer.

Sorry. I wrote wrong, I meant loss function and no activation function. The loss function I want to implement is made up of the two functions mentioned above. Would it be this?

I think this might work, but you should really check it with someone having more insight into the paper (or the general approach).

Really thank you for help!!!