I’ve been noticing severe CPU bottlenecks in my code, where CPU utilization is almost always ~100% while GPU is consistently underutilized. I tried to send all data into GPU in the first place, and the code runs fine but didn’t give any noticeable speed boost, and autograd profiler shows only a 15% decrease in to(device) calls. Afterwards, I noticed that the total size of my data set is significantly larger than available memory on my current card (~34GB of data on a Tesla K80). So I’m wondering if DataLoader is doing some implicit calls moving data from CPU to GPU or vice versa. Another thing that I thought might be the problem is that two elements in collate_fn isn’t moved to GPU (evt_ids, evt_names), so DataLoader has a mix of GPU/CPU elements. Would this make a difference?

So I’m wondering if DataLoader is doing some implicit calls moving data from CPU to GPU or vice versa.

No, the DataLoader will load each sample from Dataset.__getitem__ and use the collate_fn to create a batch out of these samples. It has no knowledge, if these tensors are on the CPU or GPU.

For general information about data loading bottlenecks, I would recommend to have a look at this post.

so I would like to revisit this topic as I have run into a similar bottleneck recently.

My setup is a relatively small dataset which I fully push to GPU memory in my Dataset __init__ function. Now I too noticed really low GPU utilization when using a standard batched DataLoader.

After some digging and profiling I found that in the current _MapDatasetFetcher:fetch function the batch is constructed by a list comprehension. Note that self.auto_collation will always be True when passing a batch_size argument to the DataLoader constructor.

This seems to be the root of the bottleneck when looking at a profiling trace where I recreate and compare constructing the batch using either with a list comprehension or just by accessing the whole batch at once from the Dataset instance: 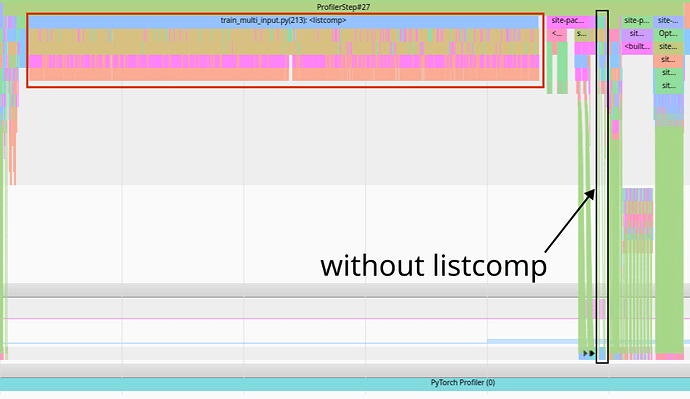 Here is the corresponding code:

So I’m wondering what is the purpouse of that list comprehension in the first place? Looking at a git blame it seems to have always been there even before Iterable-Style Datasets were introduced.