Does the transform operation operate on all data at once or does it operate once every time batch size data is loaded?

This question is raised because I have 200,000 1080P pictures. If I use 200 of them to train the network, there is no problem, but if I use these 200,000 pictures for training, the graphics card memory will be insufficient.

I want to know how the transform works

They will typically be resized one by one in your dataset class. It’s also possible to do it per batch in the dataloader’s collate function.

I always thought that the increase in the data set will only increase the training time. If the batch size remains the same, the GPU usage should also remain the same, right?

Yes, you are correct in that the GPU memory usage should remain the same. If it’s increasing for every batch you most likely have a bug in the program.

Do you have such a problem?

Do you know how to solve it ?

Yes I think that I can help you

If this won’t solve your problem, please post the code of your training loop

Thank you so much! Yes , I have loss.backward(), But I don’t quite understand the second point you said, Below is my training loop code：

Try this code instead 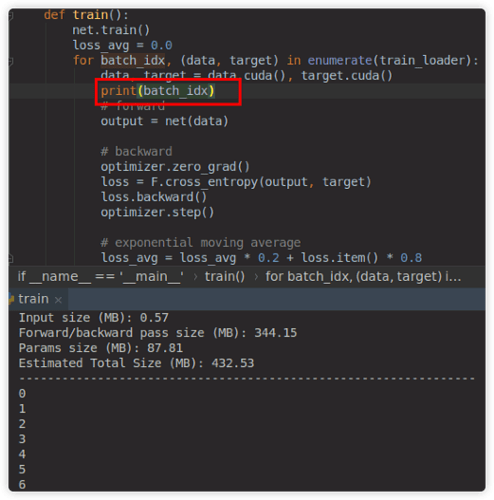 This should be abnormal, right? I tested other programs and found that one batch will start to occupy the GPU Instead of using the GPU until all batches are loaded

It’s a bit hard for me to understand you. What do you think is abnormal?
The batches are supposed to be processed one by one, not all at the same time.

I mean, the GPU should process one batch of data at a time? But now it seems that in this program, the GPU processes all the input at once, so it’s okay when there are 200 pictures, but when the pictures are 10,000, the memory is exceeded.

You are correct in that it should process one batch at a time. If it doesn’t that’s a problem. Maybe you have a bug in your dataset/dataloader then? It’s hard to say with the information I have