I successfully built debug and release versions of solution files for visual studio 2017 using cmake (I needed to set CMAKE_PREFIX_PATH in the CMakeLists.txt file to make it work though, because cmake failed work if I passed the argument to cmake on the command line)
After compiling in Visual Studio, I’m able to run the debug version of the program fine.
However, running the release version (sometimes) throws an exception. It appears after the main function returns. An error dialog pops up with the text “Debug Assertion Failed!” The File is in a runtime library minkernel\crts\ucrt\src\apcrt\heap\debug_heap.cpp line:904.
The expression: _CrtlsValidHeapPointer(blk)

I’ve also tried turning off all optimizations and in-lining. No help there either.

The only thing odd I noted is compiler warnings:

cc @peterjc123 Do you have any suggestions?

It sounds a bit weird. Would you please upload your project so that I could have a look?

sure. I’m not sure what will be most helpful. Here is the whole directory. It includes the sln, code, intermediates. Let me know if you want something else. Wait. how do I upload a zip? Or how do I do upload a project?

here is a link to the zip file. If needed I could probably create a git repository.
https://drive.google.com/open?id=1SexWYHC8Wy6g5-TzZ95XMGjfqDqfsNIt

@peterjc123. If you have time please take a look and see I missed. If you want me to upload something else please let me know.

I tried to build using the CMakeList.txt and example-app.cpp you provided, and there isn’t any problem.
Here is what I did.

For the debug configuration, you’ll only need to replace all occurences of Release into Debug.
You may also be interested in using Visual Studio for debugging, there may be some tricky points.

First. Thanks for taking a look and showing a clear example. It differs from the instructions in the Getting Started web-page. In the end, I think you fixed the problem, but not without the notes below and I still think there is a configuration bug (mentioned in 4th bullet)

I don’t know why it is doing this. I never had CUDA 9.2 installed. My CUDA_PATH is set correctly, so cmake should find the correct CUDA. Also, CMakeCache.txt only mentions CUDA 10.0. 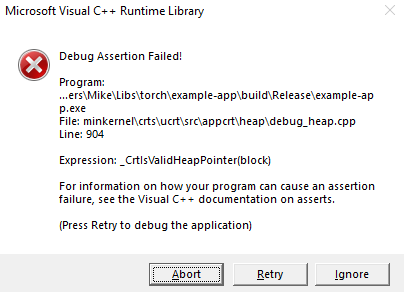 Then I noticed I didn’t copy the dlls over to my release directory. The program usually still ran, and I never get a message about not having them available.

The .lib files are useful even when doing dynamic linking in MSVC, at which time they serve as the import libraries. It differs from GCC that .so is only used for dynamic linking, while .a is only for static linking. For the pre-compiled LibTorch binaries, they are built dynamically, so you need the DLL files.