Error when forward() on windows with c++ and libtorch

I’m trying to port my refineDet model from ubuntu with python to Windows with c++,and it’s fine when loading modul with torch::jit::load,but std::runtime_error when forward() in Windows with C++.(But this step is fine in Ubuntu with c++, and if using the model in tutorial doc online, both is ok)

It will break in the following code: 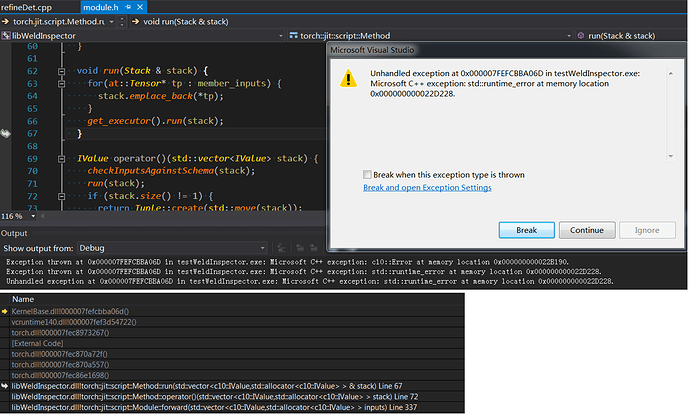 Does anyone have a similar problem?

The problem is that you are using the debug
configuration with the release version of libtorch, which is not allowed for MSVC.

I’m sure it’s release configuration, and if I load and forward with a model which is generated from the tutorial code(https://pytorch.org/tutorials/advanced/cpp_export.html), this problem will not occur.

Makes no sense.
It doesn’t matter which linked library has debug symbols or not.

From what I heard, MS C++ does not allow linking a release library to a debug exe. Something about ABI incompatibility.

Could you try again with nightly debug version of libtorch so that we can get a detailed stack trace?

tks, it doesn’t occur with nightly debug version of libtorch

, so I’m going to try with nightly release version