I have a lot of images data and I am trying to pack 8 images with 1 label interactively. After that, I will feed the data into the neural network accordingly. But I’m unable to extract the images from my customized Dataset(). Here is my code below 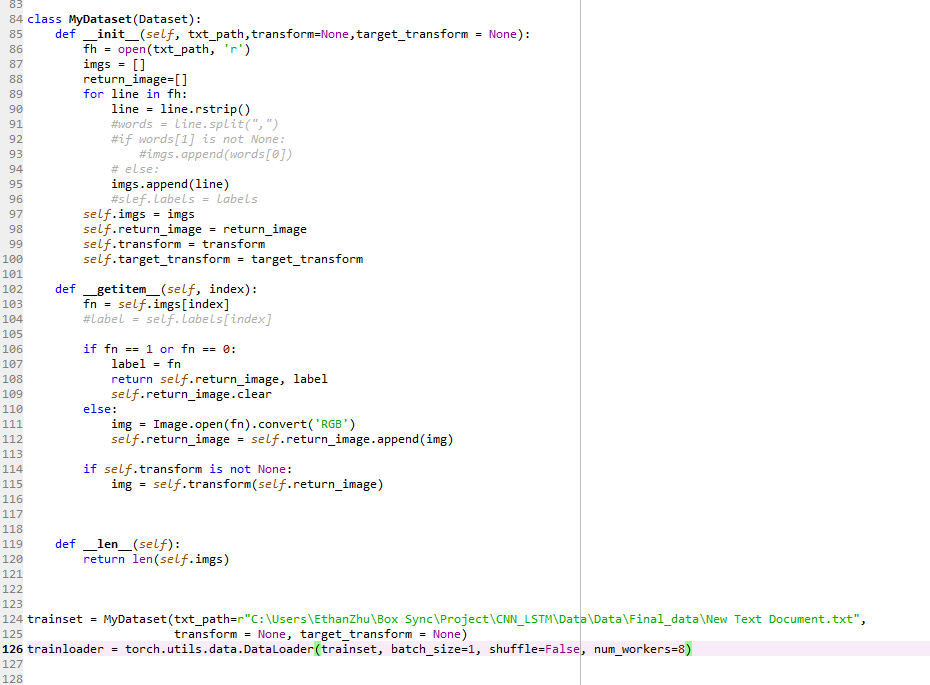 the last line 0 is the label

and is there any way to put 8 images into 1 tensor with 1 label, and then feed into CNN?

I’m new to Pytorch and really need some help, thanks!

Yes there sure is

Instead of having imgs as a list, try having it as a deafultdict where the key is the index, and value is a list of images. But, you might want to rethink this a bit. The txt_path is just 8 images and one label right? You have several of these files I suppose? Then you want to put them all in the dataset, no?

This code should get you started.

Hi Oli, Thanks for your reply, appreciate it!

I rethinked a little bit about it and I changed the format of the paths in the text file. Basically, I just put all 8 file paths in one line and separate them with a comma and put the label in the end. It looks like this:

I will put all the input images’ paths in this text file and read each line iteratively.

and instead of reading the list in initial I decided to do it in the getitem function because I have all 8 paths and label in one line.

I am using the first 2 images as an example, and it seems like working but I don’t know why I cannot use torch.cat() to combine two tensors properly.

To help you figure out the torch.cat stuff, do some printouts before and after the cat.

In this case I can see that your code is missing a parenthesis. It should be img2 = torch.cat((img1,img2)). Just a heads up, if you do a batch size with more than 1, you will probably want to write a custom collate function, just fyi