How I can interpret the autograd graph?

How can I perceive the autograd grad which has been made by pytorch?
Here I have a sample. I do not understand what arrows are or what AccumulatedGrads are and how I can interpret this graph?
Here is the actual function:
y = x*z + x + z 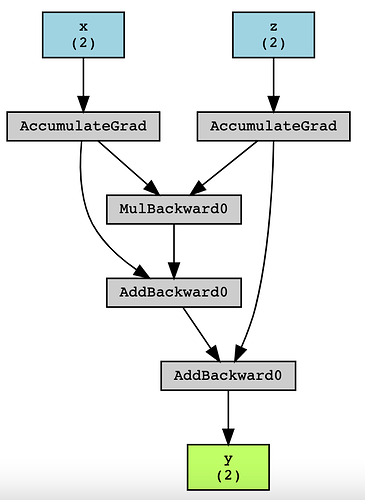 The arrows indicate the direction of the forward pass. Note, that the terms
“root” and “leaves” of the graph correspond to the backward pass starting
at the root and ending at the leaves.

The two top (blue) boxes are the two leaves, and indicate that x and z
have shape [2].

“AccumulateGrad” is a special-purpose “grad_fn” that indicates that the
backward pass should accumulate the computed gradient into the .grad
of the leaf tensor.

Python parses expressions with multiplication (*) taking precedence over
addition (+), and with operators of equal precedence parsed left to right.

So (in the forward pass that builds the graph), first you get two arrows
linking x and z to “MulBackward0”. This is the * in the expression.

Then you get two arrows linking the result of the “MulBackward0” box
(namely x*z) and x itself to an “AddBackward0”. This is the first + in
the expression, reading left to right.

Then you get two arrows linking the first “AddBackward0” box (namely
x*z + x) and z to a second “AddBackward0”. This is the second +.

The result of the second “AddBackward0” box is the whole expression,
x*z + x + z, and is linked by an arrow to the bottom (green) box – the
root – that indicates that y is also a tensor of shape [2].

ward pass should accumulate the compu

Thanks,
I saw that there are two arrows from AccumulatedGrad to AddBackward0s, so may I know what they point to?

Are you pondering why there are two AddBackward0s in the graph? - It is because xz ‘+’ x is the first addition operation, while xz + x ‘+’ z is the second addition op.

Anything else you were referring to?

Each tensor requiring gradients (required_grad=True) is associated with a special grad_fn called AccumulatedGrad which is where the calculated gradients are stored (accumulated) after a backward call.

The two AccumulatedGrad are associated with the tensors x and z. The first arrow from x’s AccumulatedGrad to the first AddBackward0 indicates x getting added to xz (the arrow coming from MulBackward0).

The 2nd arrow from z’s AccumulatedGrad to the second AddBackward0 indicates z getting added to xz + x (the arrow coming from the 1st AddBackward0).

Thanks, now I got how this graph works.
Here is just another sample for anyone in future: 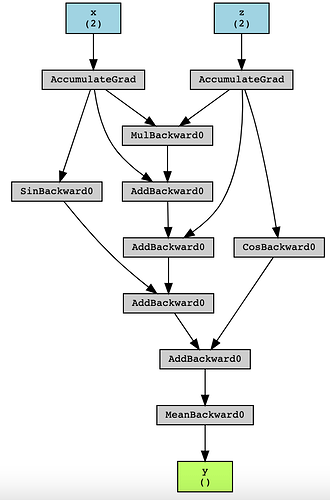