How to release GPU memory during iterations of different architectures?

I am interested in testing different kinds of architectures during training. For example, architecture 1 will have a specific architecture (conv-conv-pool) and then for the next epoch, I will modify it a little bit to become architecture 1 (conv-conv-pool-conv). This will go on until the the number of blocks is about 15 .
My problem is that I noticed that the memory goes up when I replace the model with a modified model. I checked the GPU memory allocation and it seems that the memory accepts the model as a new set of data instead of just replacing the old one. It wouldn’t be a problem if I am just testing one architecture at a time but I am using around 10 simultaneously.

Please help me to release the memory by just replacing the old architecture data instead of adding on to it.

Thank you very much!!

I guess you might observe memory fragmentation, i.e. the increased model size does not fit in the old memory block reserved for the smaller model, so a new one might be allocated.
Would it work if you start using the biggest model and shrink it?
I haven’t tested it yet, but it might be worth a try.

Thank you for your suggestion. However, I don’t have the biggest model because I am just trying to find out which model configuration will yield the highest accuracy for me and modify it. Is there a way to release the memory from the old memory block since I will train the modified model from scratch anyway?

The memory will be released. However, the new model might now “fit” into the old memory block, so that a new one might be needed.
You could check it by saving the old model’s state_dict and create the bigger model in a new script.
If the memory usage is significantly lower, you might indeed observe memory fragmentation issues.

I followed what you suggested and got this. 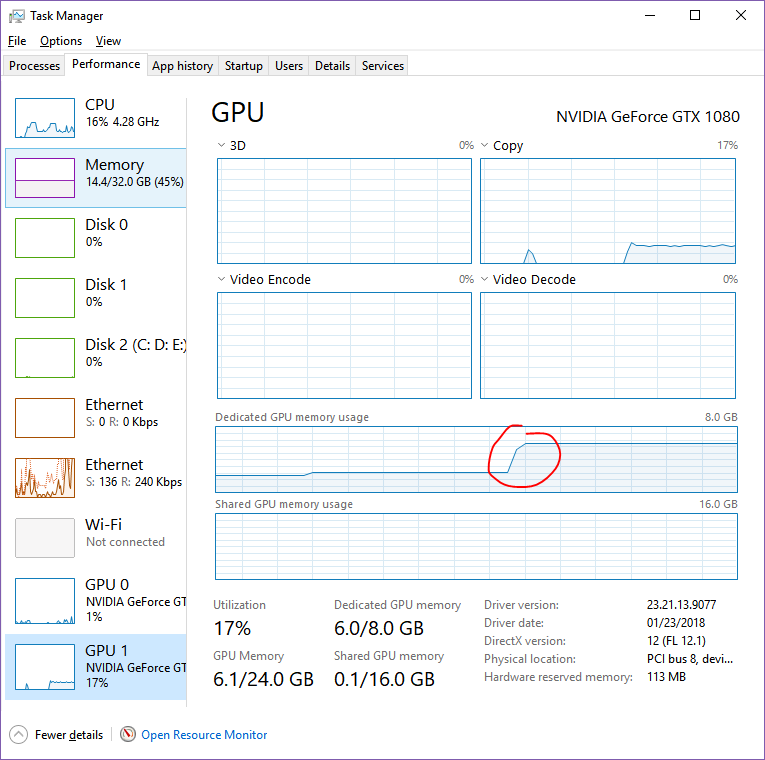 The bigger model created this huge spike on top of the old model’s memory block. I am not sure how this model can ‘fit’ into the old memory. Usually, I just restart the kernel to clear the memory. Is there a way to avoid this big spike when training a modified model?

The memory usage is most likely not showing the real used memory, but the cached memory by PyTorch.
Have a look at the Wikipedia article on Fragmentation. The table in " External fragmentation" gives a good idea of my assumption. While your old model might have taken the B block of memory, no new model bigger than B can fit in this gap, which will thus create a new block after C.