How to understand autograd.grad function

The grad function can be used to calculate partial derivative according to this post. As per documentation,

If create_graph=True , graph of the derivative will be constructed, allowing to compute higher order derivative products.

and retain_graph will be automatically set to True. However, I’m a bit confused how it works, or in other words, what should the computation graph look like by using this option.

As a tractable example, let x be a known vector, f be a torch.nn.Module instance that returns a scalar, and θ be the parameters of f:

To implement this loss, which will be subsequently differentiated against θ, I think a good implementation should: 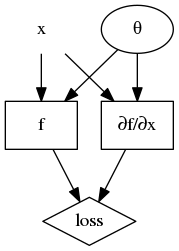 To attain the desired computation graph I may write the following code (version: PyTorch-0.4.1):

This code snippet certainly compiles. However, it’s quite difficult for me to directly verify the result is correct. My questions here are:

Thanks for reading till here! Thanks in advance for your help!

I am coding on the similar los function. Did you finally figure out if this is correct? Thank you very much.

Adding to this question,

I can only find the code on how this can be done with autograd.grad but not an exact figurative answer. This is the closest answer I could find, but still, didn’t quite get it.

And help would be really really appreciated