How to use the Generated Bundle

With the command model-compiler -backend=CPU -model=<model-path> -emit-bundle=<bundle-dir> , Bundle is generated for the model resnet18.onnx.
As said here I want to use that generated bundle and give a image as input and classify to what class that image belongs to.
I realize i have to write my own code for it and fed the input to it… something like that…So… Can you please tell me how to do it.

There is a section on the README for how to use a bundle here. Additionally there are some examples located here.

There is a main.cpp in resnet50.cpp and four files are generated in the bundle .h .bin .o .txt
Now how should the command look like to run it? I tried like this and got such error… 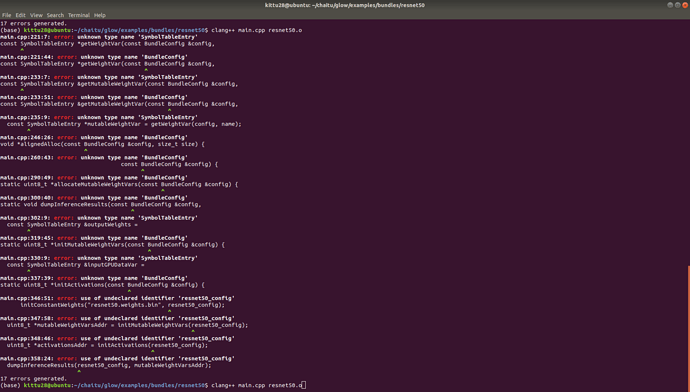 There’s a makefile, you can follow it or use it to compile for you (or see the commands it uses): glow/CMakeLists.txt at master · pytorch/glow · GitHub

The models are e.g. resnet50 we have available in our AWS bin for public testing. If you are having issues specific to the model-compiler I’d suggest filing an issue on the Glow Github page and tagging mciprian13 who is its main contributor.

I changed the model then it worked. It is for caffe2 resnet50 model .Earlier i was trying for resnet50 onnx model so thats why it didn’t work.