I am implementing a ResNet + Transformer model to do image caption. Gist of code is as follows:

The overall idea is that I take spatial features from a pre-trained resnet model (B x W*H x C) and use them as inputs to a transformer model. Similar idea can be found in this paper and repo.

During training, I realize that the model is not picking up information from the image side and is generating outputs based entirely on the given caption. It is purely using the prior it learned from all the captions to generate the next word, instead of looking at the image. To validate this, I tried using activations = torch.zeros_like(activations) as inputs to transformer, and obtained a similar performance to using original activations.

To investigate, I generated a plot of gradients at different layers of the model. 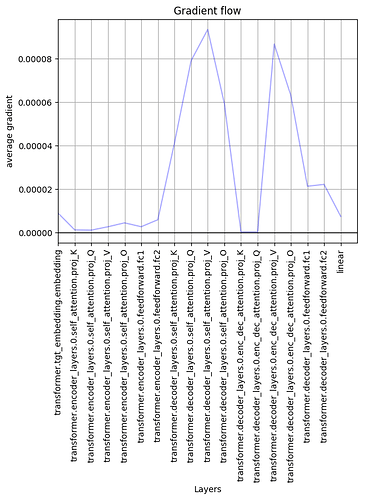 The problems of diminishing gradients could be alleviated by gradient clipping, batch/layer normalization and proper weight initialization, which I already integrated with the model. However the issue persists. I am wondering has anyone encountered a similar issue before? Is the problem more likely to be due to improper training parameters, or potentially incorrect model implementation? Is there a way to force the model to base its caption output on the image features? Really appreciate any feedback or pointers!

Turns out that a low gradient flowing through the network, in this case, indicates that the image features do not contain interesting information. Upon further checking, I realize that my xavier initialization of the model forgets to exclude the pre-trained resnet, which obviously destroys all the image features. With the inputs to the Transformer being random values, the model learns to ignore the input altogether.

For anyone having the similar issue: try to overfit the model with one example as a sanity check on the model implementation. Obvious problems tend to pop up with this simple yet classic debugging method.