Import torch file with trained model in CUDA, in a CPU machine

I have trained my Agent and saved it in a torch file, using Colab and its CUDA resources.

I want to import the torch file locally in a machine with a CPU and use it to test the trained agent in a set of test environments. However, I get the following Error:

RuntimeError: Attempting to deserialize object on a CUDA device but torch.cuda.is_available() is False. If you are running on a CPU-only machine, please use torch.load with map_location=torch.device(‘cpu’) to map your storages to the CPU. 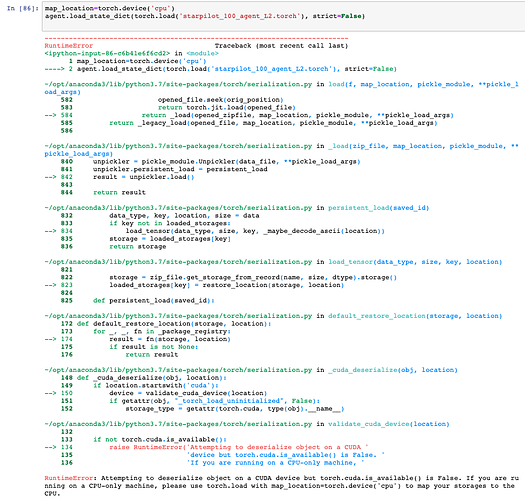 You don’t set that as a global variable, but pass it as a keyword argument (after the file) to torch.load, i.e. torch.load('fdsgfg.pt', map_location=torch.device('cpu')).

pass it as a keyword argument (after the file) to to

Thank you Tom. That worked!

I have same problem and tried this solution.
My PyTorch version is 1.12.

I get another error:

I trained the model on google colab and using on cpu computer. both version are same.