This comment has an example: Multi Label Classification in pytorch

That thread has a lot of detail.

Thanks for your reply. But it is not exactly what I need. My network generates 3 outputs which have different loss functions (MSE, Cross Entropy,…). Or use the same loss function but completely different outputs (e.g. classification from list 1, list 2 and list 3) 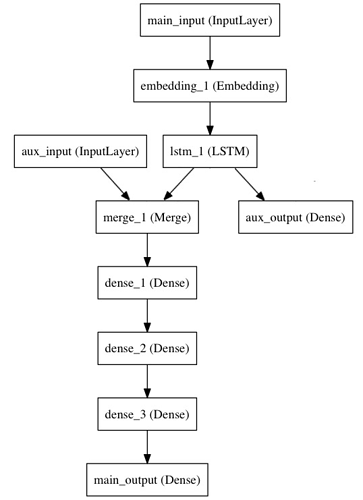 doing multiple output + losses should be straight-forward. In your forward function of the model, you have the variables corresponding to each output, and send them through three separate loss functions.

The outputs of the loss functions can be backpropagated all together using torch.autograd.backward

Thanks for your hint. I also find this post. I try to compute a loss for each output and append them to a list as the following code,

Then I print the losses, which seem quite correct.

Then I tried to do the backpropagation

However, an error occured:

Am I doing wrong? How can I do backpropagation with mutiple loss?

you have to give: torch.autograd.backward(loss_seq, grad_seq) where grad_seq is the gradients for each of the losses.

Thank you very much. But why can we use all ones as gradients here?

if the loss is a scalar value, then all ones as gradients are what you will use if you call loss.backward().

Thanks: I understand the ones are the gradients dloss/dloss=1 that are put at the very end of the backpropagation graph.

But creating this grad_seq this way fails with
AttributeError: ‘Variable’ object has no attribute ‘new’

EDIT: OK, it looks like it automatically converts tensors to variables, so this seems to work:

Can a model output multiple outputs (as in the above experiments) and only have a single loss function?