When I use torch.nn.functional.kl_div(), I notice that while the reduced mean of result is positive, some values in the unreduced result are negative. I was wondering if it is the correct behavior, or I made some mistake in my codes? 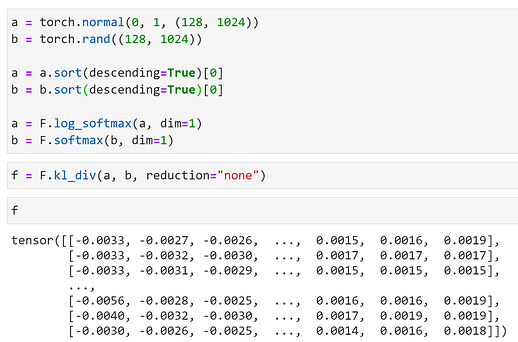 I just tried a toy example and got the same result, so I guess it’s the correct behavior of kl_div… 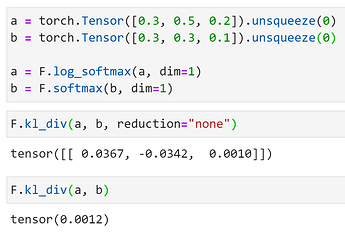 I’m still a little confused about how the mean of unreduced result is guaranteed to be non-negative, though I know KL divergence should be non-negative. Any explanation is appreciated!

I’m still a little confused about how the mean of unreduced result is guaranteed to be non-negative, though I know KL divergence should be non-negative.

The reason is that, by definition, the KL divergence is taken between
two probability distributions, not between two arbitrary sets of numbers.
If you apply the KL-divergence formula to arbitrary numbers, the result
is not guaranteed to be non-negative.

Your a and b contain three elements. Let’s therefore say that you are
working with a three-class problem.

The result of the unreduced kl_div() is simply the three terms in
the KL-divergence formula before they are summed over the three
classes. Not being summed yet, the individual terms “can’t know”
that they come from proper probability distributions that sum to one,
and need not be non-negative. Only when summed together to form
the full KL divergence do they produce a result that is guaranteed to
be non-negative.

It is a theorem – and, in the discrete case, the result of a not particularly
difficult calculation – that the KL divergence is non-negative, but the
theorem (and calculation) rely on the KL-divergence formula being
applied to legitimate probability distributions.

Thank you! Your answer perfectly resolves my confusion.