Even though I think my code calls the optimizer.step via Gradscaler function before the lr_scheduler.step() function I am still getting this warning:

As you can see in my training code scaler.step(optimizer) gets called before scheduler.step(), but I am still getting this warning. Any ideas what might be wrong?

Here is my training code.

If the first iteration creates NaN gradients (e.g. due to a high scaling factor and thus gradient overflow), the optimizer.step() will be skipped and you might get this warning.

You could check the scaling factor via scaler.get_scale() and skip the learning rate scheduler, if it was decreased. I think it might be useful to add a utility function (or return value in scaler.step()) to indicate, if the current optimizer.step() was skipped.

@ptrblck many thanks for your answer, really appreciate you took time for this. I am using the torch.optim.lr_scheduler.OneCycleLR scheduler (torch.optim.lr_scheduler.OneCycleLR(optimizer, max_lr=1e-3, steps_per_epoch=len(train_dl), epochs=epochs)) and at the beginning of the training the learning rate might be very small. The actual learning rate curve looks like this: 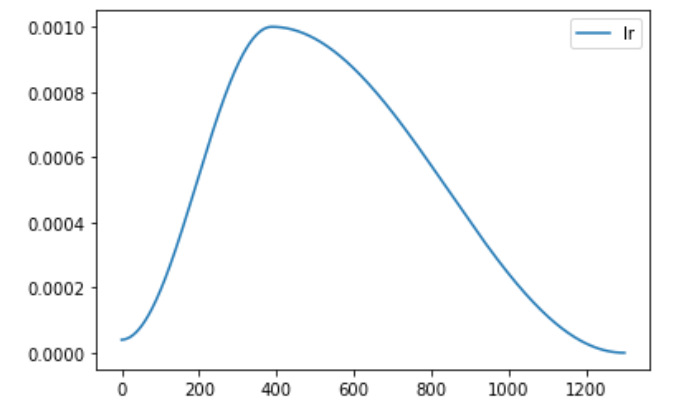 So could it be that because the learning rate is very small at the first iteration, that this is causing this NaN gradients?

@ptrblck Just checked the documentation of the GradScaler class and found this:

The scale factor often causes infs/NaNs to appear in gradients for the first few iterations as its value calibrates. scaler.step will skip the underlying optimizer.step() for these iterations. After that, step skipping should occur rarely (once every few hundred or thousand iterations).

Could this be the cause for such warnings?

And another question: do you get the scale factor using scaler.get_scale() where scaler is an instance of torch.cuda.amp.GradScaler?

Could this be the cause for such warnings?

Yes, exactly. That’s what I was trying to say here:

If the first iteration creates NaN gradients (e.g. due to a high scaling factor and thus gradient overflow), the optimizer.step() will be skipped and you might get this warning.

Sorry, if I couldn’t describe it clearly.

do you get the scale factor using scaler.get_scale() where scaler is an instance of torch.cuda.amp.GradScaler ?

Yes, that’s what I had in mind.

I have tried to capture the scale factor on each batch (100 epochs, batch size: 64, 24 batches per epoch) and then plot it: 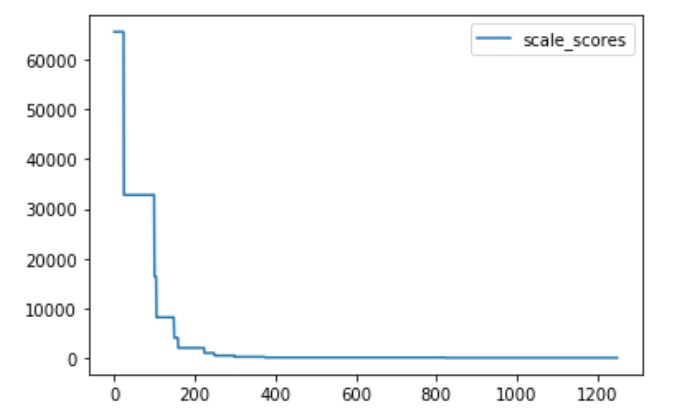 Right now I am not getting the warning, but still it shows up some now and then. Anyway I think that we know what is causing this issue. @ptrblck Many thanks for your pointers.

Thank you all very much for the help. It wasn’t that clear but I could figure it out. The way I did it:

So this solution checks that the scale is NONE rather than just really large? Does this work, since I am encountering the same thing.

I know this is an old post, but just wanted to get this out there in case it helps someone.

Simply checking scale != scaler.get_scale() will return False even when the scale_factor is increased (and optimizer.step has NOT been skipped), which we don’t want.