Hello, I trained my CNN on PyTorch and have the three lines below as preprocessing: transforms.Resize(256),
transforms.CenterCrop(224),
transforms.ToTensor(),
transforms.Normalize([0.485, 0.456, 0.406], [0.229, 0.224, 0.225]) . I am building an android app and I used the code here to build it https://github.com/cedrickchee/pytorch-android/tree/master/app/src. I am not sure about what this part of the cpp code means ? And how should I do the preprocessing that I need (center crop and normalize)? Thank you so much for help. 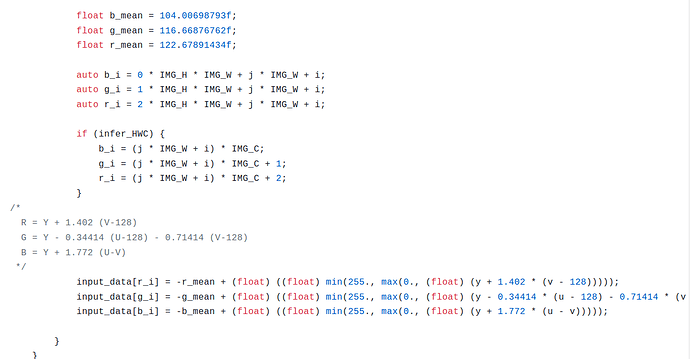 It looks like the code you’ve posted subtracts the mean in each channel, but does not divide by the standard deviation.
Also, the code is apparently dealing with unnormalized image values in [0, 255], which explains the mean values.
The complicated looking conversion is just the transformation of YUV to RGB format.

For Python I used:

The transformations are not 100% the same because of the differences in implementation, but at least are similar enough to allow for alignment in model prediction…