Profiling PyTorch: pred.cpu() is reponsible for 95% of runtime?

I am currently profiling my Torch implementation of a graphical model, using the python cProfile class. Inference on my model takes around 12 seconds on GPU (Torch), 15 seconds on CPU (Torch) and 14 using CPU (numpy). The very low speed-up from CPU to GPU surprised me and this is the reason I am profiling my model.

The profiling output (see below) indicates that 95% of the runtime is used by a single .cpu() call. This call is done at the very end of the prediction pipeline in order to copy the results into numpy. 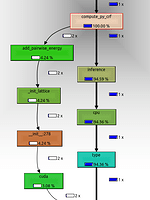 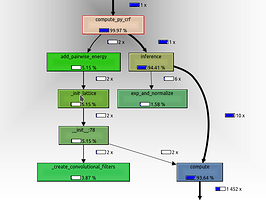 The main computation of the model is done in the kernel.compute() function, which is called 10 times (see pseudo-code below). In the numpy implementation this takes up about 93% of the runtime, which seams about right. kernel.compute() mainly consists of convolutions, dot-products, matrix-multiplications, reshapes and transposes. Surprisingly, the kernel.compute() call does not even show up in the torch profile graph. This means that less then 1% of computational time is spend inside this function.

So overall I am very surprised by this finding and I wonder how to interpret this. At the moment I see three possibilities:

Hi,
I think the problem here is that all cuda calls made with pytorch are asynchronous, and so the only point where it actually waits for the computations to be done is when you use them: when you want to send them back to the cpu.
You can either use torch.cuda.synchronize() after some operations to force synchronization.
You can also try setting the CUDA_LAUNCH_BLOCKING=1 environment variable to force the CUDA api to become synchronous. Note that this will most certainly slow down your code.

Thanks a lot. Yes, the asynchronized computation explains this output. CUDA_LAUNCH_BLOCKING=1 is a great hint. This is very useful for meaningful profiling.

I posted a follow up question using the insides gained by additional profiling runs in a new thread.

Regarding forum etiquette. Is it generally preferred to post follow up questions in the same thread or to create a new thread for new questions?

For an implementation of a graphical model I need to perform matmul along the axis 1 and 2 of a four-dimensional input tensor. The axis 0 and 3 should be broadcasted. The current implementation of torch matmul performs the matrix multiplication across the final two axis and performs broadcasting across all of input[:-2]. Currently I solve this by first transposing the input and then performing matmul. input_row = input_col.transpose(1, 3) message = torch.matmul(self.gaussian, input_row…