Profiling to find out whether non pytorch part is slow

I suspect that my dataloading is slowing things down because I’m reading from disk a lot and don’t have an SSD.

So I don’t actually care about which part of my pytorch model is slow, I just want that when I use cprofile or py-spy I get approximately accurate numbers regarding the ratio between how much time is spent running the model vs loading data.

But I remember reading about how by default when profiling CUDA code only the time to launch the kernel will be calculated, not the runtime on GPU. One has to synchronize to get more accurate results.

But I only care about how long running the entire model takes, and assume there has to be a synchronization step to get the final result?

TL;DR If I just care about comparing the runtime of forward-backward to nonpytorch code can I just use normal python profiling tools?

So there are several things here:

Because I like undercomplex measurements a lot, I sometimes just do the following in a separate process (probably only works for one GPU, but you get the idea):

For a recent run of finetuning something, that looked like this for me, and I thought it was very reasonable: 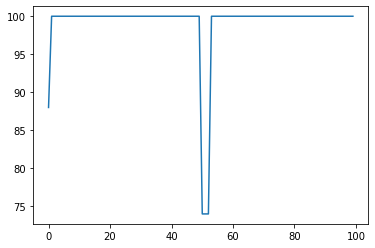 If you find this to be 0 more often than not while your training runs, you’re in trouble.

In this case, I would probably just sprinkle time.perf_counter() accounting onto the training loop. The important bit here is to include the time that elapses between the end of the loop and the start of the next iteration, as this is the time the program is waiting on the next batch, i.e.

This should give you an idea of whether the dataloading or the loop is where the program spends the most time. If you uncomment the synchronization, PyTorch will enforce no overlap from queued but unfinished CUDA computation. The difference between the loop measurements with and without is approximately the overlap (i.e. harmlessly spent dataloading time).

Of course, the same should work with cprofile / py-spy instead of manually doing this.

Of course, a more sophisticated method is to use with torch.profiler.profile(): and the corresponding analysis tools.

Thank you for the elaborate answer