It looks like I have installed the version 0.4.0 successfully as the attached screenshot.

Does colab forbid 0.4.0 or is there anything wrong with my installation? Thank you.

Could you try to uninstall PyTorch and run the following command instead:

It’s working in my colab environment.

Does not work for me , still prints torch version 0.3.0.post4 , uninstalled torch and torchvision using pip3-

There might be another PyTorch installation.
As you can see, you’ve uninstalled torch-0.4.0, then reinstalled it, but version 0.3.0.post4 is loaded.
Try to run the uninstall command several times until an error message occurs saying there are no torch installations.
Otherwise, could you try to create a new “clean” colab notebook?
I had similar issues with some package installations.

Yeah, changing the notebook worked …thanks!

Apparently torch can be imported even when it is not installed XD (cache ??)

Thanks man, that’s work for me.

In my case, I uninstalled previous pytorch(torch) following your guide. But, I got “0.3.0.post4” by command “print(torch.version)” even can’t find torch in “pip list”! There is some problem about caching python module in using notebook. Best solution is make new notebook and install lasted pytorch version. Another solution is deleting cache. Click “Restart Runtime” below “Tool” in colab menu. Then you can see message “ModuleNotFoundError: No module named ‘torch’”.

Thanks worked for me (I just skipped right ahead to a new notebook; the old one didn’t have too much work)

Do you get this error while installing PyTorch?
Could you post the stack trace after the @ symbol?

The error is thrown by gperftools as far as I know, so apparently the notebook doesn’t like some allocations.

I’ve been running same code today, but notebook crashes and restarts, so I can’t get stack trace after. I’ll update later if I get it running.
It dies on torch import line 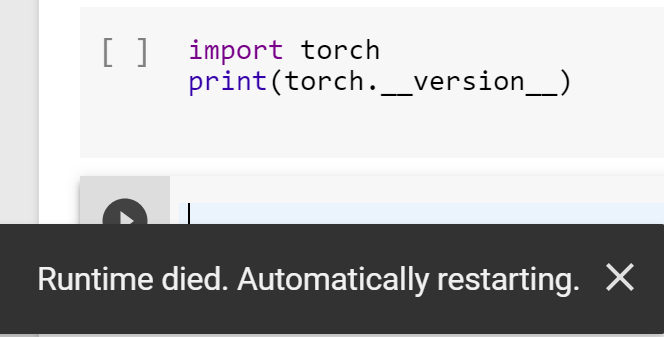 Hope it helps. What kind of info can you extract from this?

Unfortunately nothing. When searching for this error, someone mentioned that the stack trace was put after the @, but apparently that’s not the case.

I tried to run the script in a new notebook and got the same “error”.
Apparently it’s just a warning, as after a few seconds, PyTorch is successfully installed.

Could you try it again and wait a few more seconds?

I’m running new notebook from another laptop, and now, after several days it returns this:

Have no idea what is this alloc, but now it works. And it didn’t last time.

I want to install PyTorch 0.3.1 but when it is install
the colab " module not found "
What am I should doing?

It works for me. Thank you!