OK, so in the source “code” of the poisson distribution under icdf we find the following:

So I tried to implement my own version, and indeed I have, except that it keeps killing the gradient.

In the following, x is an n by N tensor representing a sample of a random vector with n random variables and N samples. Lambda contains N identical column vectors of length n such that Lambda[i, any] is the mean of variable at i. The tensor x is uniformly distributed with mean 1/2 and variance 1/12.

Consider the quantile function Q of the Poisson distribution and compare it to the Taylor-Maclaurin power series for the exponential function. Then for some probability p, k = Q§. 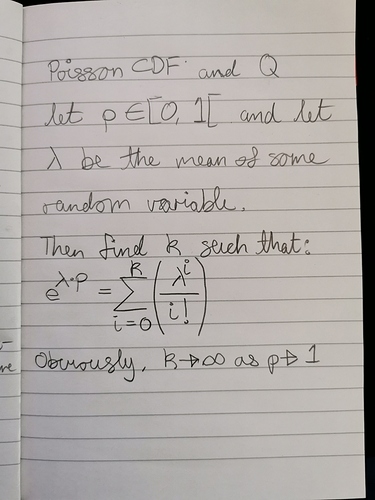 We can replace factorial of the tensor with the gamma function, but torch has only the log Gamma for some reason, so we need to replace n! with torch.exp(torch.lgamma(n+1)).

So my code does this by incrementing tensor k by Heaviside of the difference between the left and right-hand sides:

But the grads disappear whenever I use the above procedure in a function.

Some help would be much appreciated! Scipy does have a such a feature, is it possible to use it on the gpu perhaps?

You’re implementing a discrete function, thus there no gradients.