Recently my lab has received two new rtx3090 gpus and I decided to try them out with a resnet50 model I’m using these days. Curiously I found that there was nearly a 50% increase in VRAM compared to when I used two RTX 2080Ti with a Titan rtx nvlink bridge.
The project setup: my dataset is comprised of 640*640 images, training batch size: 20 and testing batch size: 120. I’m using the standard torchvision resnet50 model and wrapping it with nn.DataParallel (I haven’t started setting up DistributedDataParrallel yet).
I’m also using torch.backends.cudnn.benchmark = True and the optimizer is the classic optim.SGD.
When I was using two rtx 2080Ti, I would use around 10GiB on each graphic card, whereas now with the two rtx3090 I have 19.7 GiB on the first gpu and 11GiB on the second. Here is a screenshot of the nvidia-smi command: 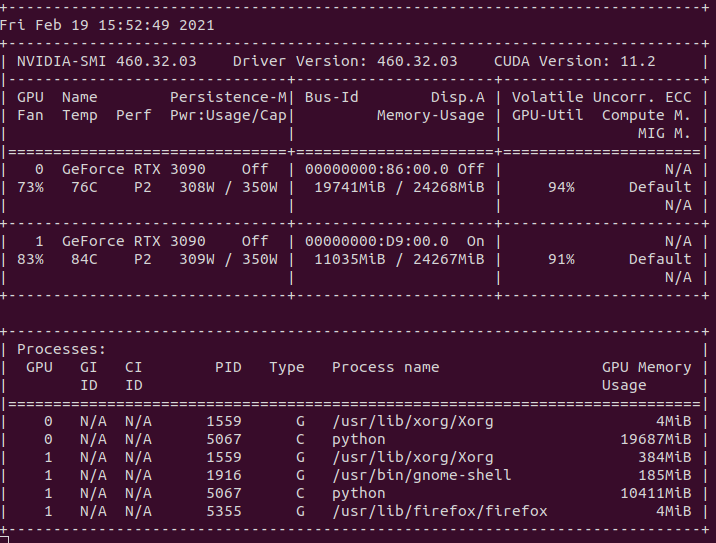 Why do we have this increase in VRAM usage with the rtx3090?
Thanks in advance

Thanks for the help ! I deleted the python cache of my project (I forgot to delete it when I changed gpu) and the problem seems to have gone more or less, I only have a 1GiB difference during training after the first two epochs compared to with the two rtx2080ti. Using torch.cuda.memory_summary(), we can still observe some memory usage higher than what the rtx2080ti could handle (a peak memory usage of 22Ggib for example), but I expect this is just the optimizer enjoying itself with the extra memory.