The documentation for the Conv3d module states that inputs and output can be grouped together, each group with its own set of weights:

groups - controls the connections between inputs and outputs. in_channels and out_channels must both be divisible by groups.
At groups=1, all inputs are convolved to all outputs.
At groups=2, the operation becomes equivalent to having two conv layers side by side, each seeing half the input channels, and producing half the output channels, and both subsequently concatenated. At groups=in_channels, each input channel is convolved with its own set of filters (of size out_channels // in_channels).

I did a small experiment to confirm this works as I expect it to (and btw, awesome framework where you can just whip something like this together in no time at all

So the input is indeed treated as two separate groups of inputs, each corresponding to a proportionate number of outputs, and (judging from the number of parameters) each group has its own set of weights.

This is, however, not really what I want to do here. I would like all groups to share the same set of weights (i.e., a 20x10x3x3 tensor in the example).

I first tried concatenating several output of a smaller Conv2d layer. It works as expected, but it’s considerably slower (because operations have to be done sequentially?). 10% on my potato-testing-card and 40+% with multiple fast GPUs.
I then tried several combinations of 3d kernels with some unsqueeze and view operations for good measure, but they were just as slow and didn’t produce the result I wanted.

Does anyone have an idea on how to share weights between groups?
For now I’m fine with separate weights (it works quite well), but I would really like to test a theory.
However, blocking resources for several days with an architecture I know is inefficient is not something I’m comfortable with

I’m newbie in pytorch and also interested in the shared weights topic. If we use groups==in_channels, we know that each input channel would have its own set of filters, but different, so I did a test to clarify this concept. 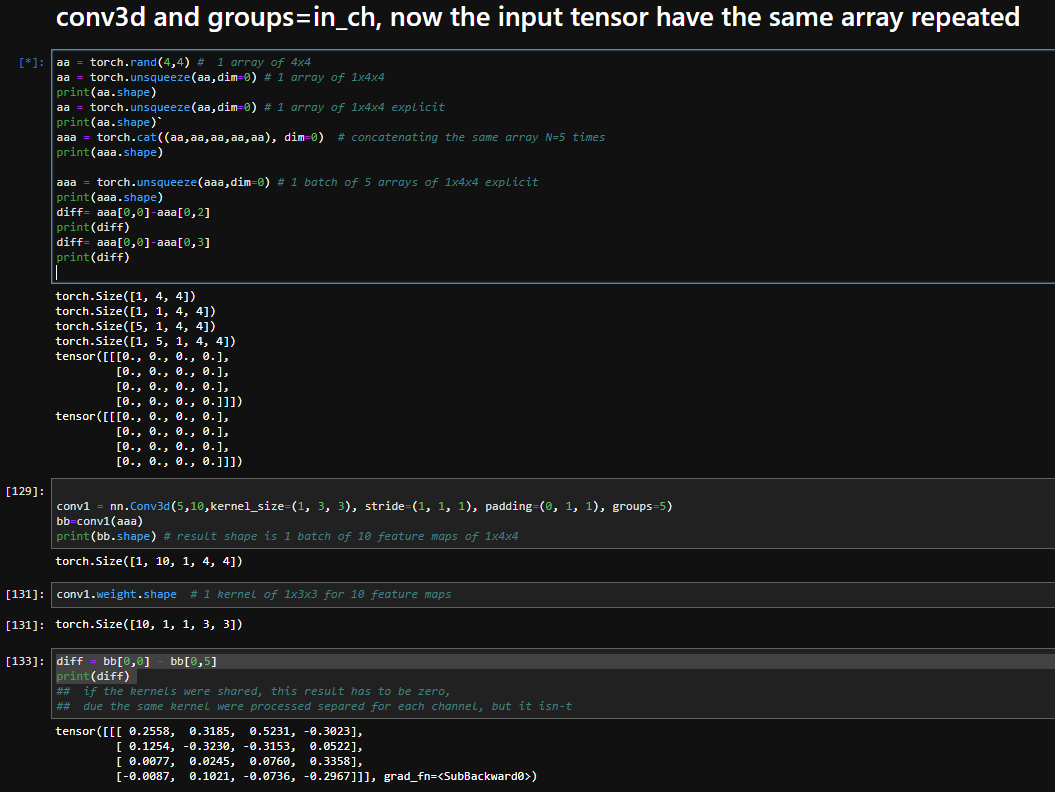 It would be nice to have this feature of shared_by_group or something in future release.

How did you solved @jfolz?

I’m also interested in this… Is there any news?