While using the visualize tool of szagoruyko I have found that, for specific functions, there are more variables in the computation graph than those that I had defined. In particular, I’m referring to these two examples:

This one gives me this graph

Blue rectangles represent parameters, orange ones represent variables, and grey ones are operations. Another simple example is the following:

Which gives me the following graph 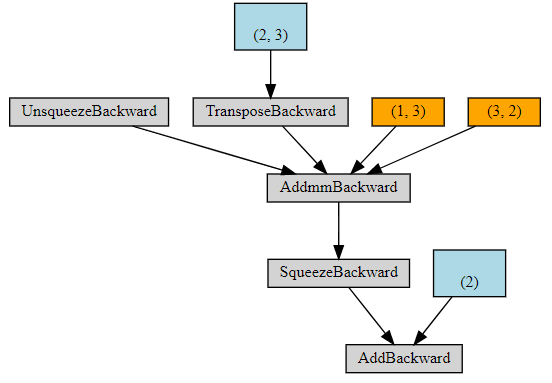 As you might see, there are two variables, of sizes (2, 3) in the first example and (3, 2) in the second one, that I did not define but are nonetheless being used to perform the computations.

Does any one know what are these tensors? Can they alter the gradients that I compute in a backward pass?

If you look at the function in the first example, you can see that the mv operation is actually done in the backend with the more general addmv function (which adds a constant to the output). This is where this extra (2,3) Variable comes from.

In the second graph, you can see all the internals of how the Linear layer is implemented. Here the addmm functions is used, and so here again you see an extra Variable being used for the add part.

In both cases, these are buffers that contain 0 and so won’t change the gradients in any way.

Great, thank you very much for the clarification!