I am trying to understand why making a PseudoLinear layer that does not actually do matmul and instead performs element-wise multiplication by weight vector is not proportionally faster (e.g. on a 160-wide layer I expect ~10x speedup, but in practice it is negligible), and what can be done about it. Here’s my experiment:

I am able to achieve larger speedups for larger kernel sizes.

This won’t be the same between different accelerators though. There are results from another GPU:

You can improve the performance of small kernels using CUDA Graphs.

Results from the same device but using torch.cuda.make_graphed_callable:

It would be interesting to know where this Speedup converges to. Figured it out, it’s infinity.

I mean, theoretically, the speedup (or rather difference is speed, cause the substitute is nothing like Linear) should be exactly the size of the input width (N) less a small constant for bias. Matmul does NxN multiplications and this thing does only N both for forward and backward passes, which you can see for larger widths.

It is curious that even on larger sizes the speed difference is all over the place, but I guess this may have something to do with memory cache hierarchy.

You’re right, I assumed this is a small kernel issue and didn’t really think about it.

Notice that nn.Linear executes forward that is written entirely in C++/CUDA. In your PseudoLinear each operator is executed in CUDA, but multiplication and addition are executed as separate kernels, which makes for an overhead. You can use JIT to mitigate this issue a little. You won’t see any benefit from using JIT in case of nn.Linear based model though.

After fixing the above, I get the following performance scaling: 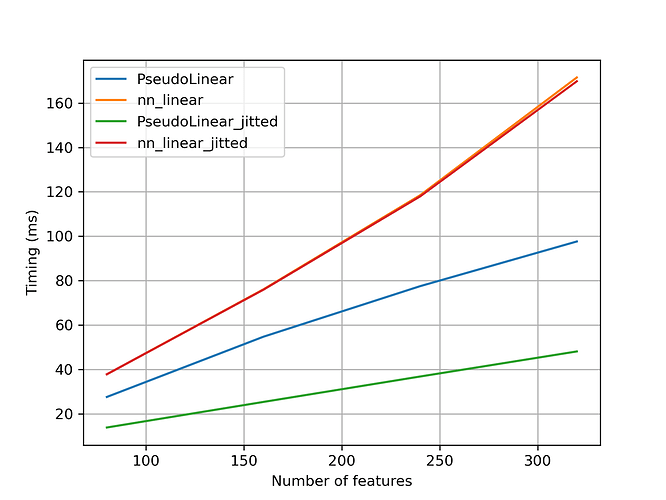 I used batch size of 32768 to fully utilize the GPU even for a small number of features.