I apologize if this has been asked before, but searching for this is a bit difficult with many people using “deconvolution” for the transposed convolution.

A transposed convolution does not do this. It performs a ordinary convolution with kernel x kernel x in_channels input to 1 x 1 x out_channels output, but with the striding and padding affecting how the input pixels are input to that convolution such that it produces the same shape as though you had performed a true deconvolution.

While the two approaches produce the same output shape, they produce different results and those results are achieved in very different ways.

So for convolution of stride 2, with kernel 3x3, from the input blue to the output green, the convolution would look like this:

The true deconvolution would be the exact reverse operation. With the green now being the input, and the blue being the output.

In the context of image processing a deconvolution is the inverse of a convolution f = g * h (+ n), i.e. to determine the unknown function g given h and f, while n represents the nosie. One could try to approach this problem with the Fourier transform, as this would yield G = F / H - N / H . However, this will usually enhance the noise term, as the spectrum of the filter H usually flattens for high frequencies, while the noise term still has a lot of power in these frequencies.

There are some other techniques like Wiener deconvolution to counter these noise problems.

Let me know, if I understood your use case right or am completely missing the discussion.

Sorry, I may have spoken in a misleading way. I am not looking to find the inverse of a specific convolution. I’m looking for a layer which performs the opposite of a convolution layer. That is, a layer which will accept an input of height x width x in_channels, move across each spatial element being accepted as a 1 x 1 x in_channels input, with each of these outputting a kernel x kernel x out_channels patch, and combining those patches to form a final total output. This can of course also be represented as a similar matrix multiplication as the ordinary convolutions. Is there a reason such a layer would not be an option? 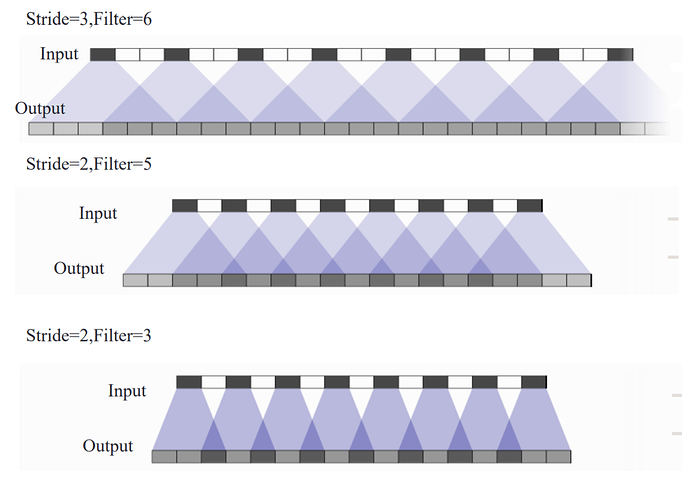 Interestingly, the image you provided illustrates the transposed convolution using deconvolutions instead of how the transposed convolution actually operates (with the kernel size being applied to the input, not the output). The effect is the same, but the actual process is different. To me, that deconvolution point of view makes more sense (and I assume it makes more sense to others as well, since that’s how they’re illustrating it in their explanation). And further, I think it would require less calculations (since you’re not constantly inputting a bunch of padding zeros into your convolutions). Is there a reason why the implementation is performed this way rather than as a deconvolution?

Hi, the paper (P17) said “Doing so is inefficient and real-world implementations avoid useless multiplications by zero, but conceptionally it is how the transpose of a strided convolution can be thought of”.

There is a difference between these two methods, because when we “merge” deconvolution results of all pixels, there can be max, mean (neglecting zero), sum and etc.

But transposed convolution method is only equivalent to sum, which might not be desirable since the number of pixel contributing to a result pixel is changing, which will lead to a “non-uniform” result.