I am quite new with torch.
And I have mostly difficulty with fitting simple feed forward network with some random data

I tried to tune hyper parameters like number of nodes and learning rate as well as tried changing optimiser and loss function but looks like not much improvement. Is there any issue in above code or someone also had bad time with torchs regression?

I tried rearranging zero grad before loss but but seems like loss not going much down though. 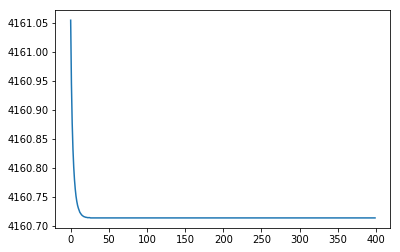 Yes that is what I tried so now 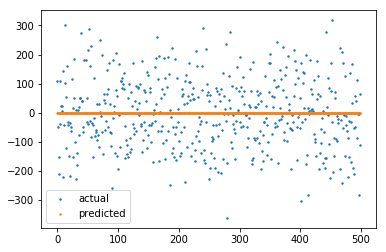 Also, you might need to lower the learning rate as I described above

I already tried both ways but but still loss and prediction doesn’t change .
I think need some transformation over data.

ink need some transformation over dat

You need thus to normalize your data to have zero mean and unit variance.

I am trying normalisation but I am still worried about why torch fails to learn anything? as most of prediction from model is around zero

Might be unrelated, but could you check if the model output and target have the same shape?
If your target is missing the feature dimension ([batch_size] instead of [batch_size, 1]), an unwanted broadcast might be applied.
In the latest version this should throw a warning.

This was real issue I was using Torch 1.0.0 hence didn’t got any warning

@Deeply Do you have any references for your statement? As far as I know, that is not necessary.

I think ptrblck provided the solution to your problem, but, it would be a good idea to normalize your data, especially if it has entries of different numerical ranges/scales. For example, assume having a vector with these two values x=[.05, 12]. Working with this vector may make your regression biased toward the highest value (i.e. 12). Here’s a link that describes this issue in some detail.

@Deeply I did not mean the normalization, meant the part about the position of zero_grad

I think the method based on ptrblck’s comment with a lower learning_rate (i.e. 1e-3) makes sense.