While trying to inference by a pretrained pytorch model, I found a strange phenomena that torch.cat may fail to get right answer, as shown in figure.
when abc is a tensor in GPU, torch.cat([abc,abc],axis=1) may running in a weird way.
but when abc is set to CPU, the answer would be correct.
and when I try abc.cpu().cuda(), the answer would be correct again.
I can’t understand why it happend. 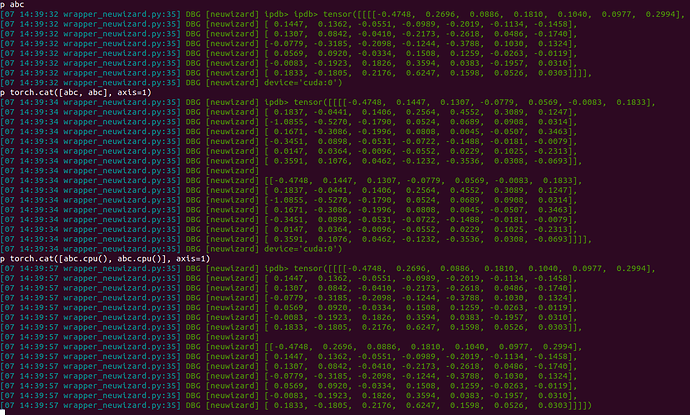 Could you post a minimal, executable code snippet as well as the output of python -c torch.utils.collect_env, please?

Sorry I can’t reproduce this error by a minimal, executable code, the error comes from a big project. But I suspect that the error comes from uncontiguous memory, since there’s some tensor.permute in the code.
I further tested tensor.contiguous(), and found that this could solve it. as shown in figure.
env informations are as follows. 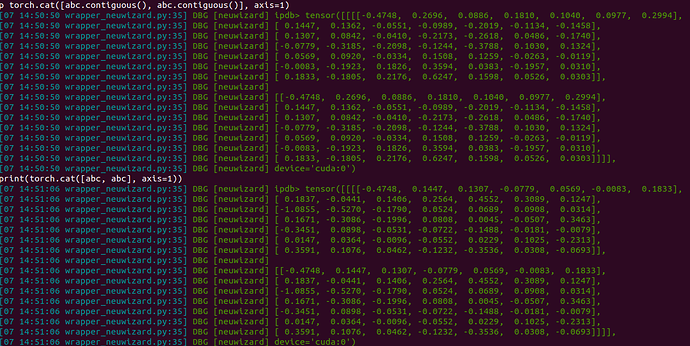 Could you update PyTorch to the latest stable or nightly release and check if you are still hitting the issue?

I tested with the same config on pytorch 1.10.2 and it works well. The bug disappeared.
It seems that this issue has been solved in some version? Could you please help me check in which version of pytorch this bug is fixed? Thanks a lot!