Hi,
in our project using multiple gpus for training a resnet50 model with PyTorch and DistributedDataParallel, I encountered a problem. Here is the github-link for our project.

A benchmark framework for Pytorch. Contribute to aime-team/pytorch-benchmarks development by creating an account on GitHub.

Looking at the comparison of the validation accuracy progress after each epoch between a single GPU and multiple GPUs, it looks like the GPUs don’t share their training results with each other and it’s actually just one GPU training the model.
Here is a comparison between a single Nvidia RTX 3090 and 4 Nvidia RTX 3090 using the same training parameters trained with the imagenet dataset. 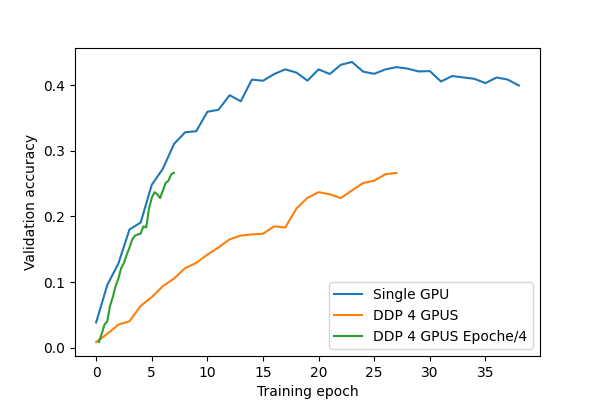 If the epoch axes of the 4x3090 graph is divided by the number of gpus (green curve), the graph has a similar shape like the one of the single GPU (blue curve). So basically training with 4 GPUS needs 4 epochs to get the same results like a single GPU achieves in only 1 epoch. Since the dataset is distributed over all GPUS, each GPU only uses 1/4 of the whole dataset, explaining the worse training result for each GPU after each epoch.
Playing around with training parameters like using different batch sizes and learning rates gives me the same result. I have another comparison with different training parameters following in the next post because of the limit of embedded media for new users. 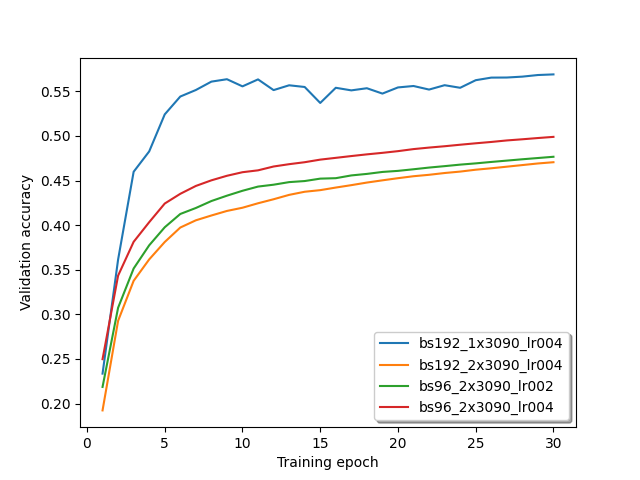 So basically training with 4 GPUS needs 4 epochs to get the same results like a single GPU achieves in only 1 epoch.

This is not true if you consider the sync among 4 GPUs per epoch. It should be equivalent to running 4 epochs on a single GPU.

Additionally, your repo has an arg average_gradients. If you turn on this as a duplicate gradient averaging step, will it achieve the same accuracy as a single GPU?

What about using DataParallel?

Thank you for your replies!

I checked the gradient values of different ranks after the backward propagation and can confirm they are equal over all ranks. So the communication/sync between the GPUs seems to work. But I still don’t understand why the development of the validation accuracy is still that bad in our case. I wasn’t able to get a training setting where multiple GPUs using DistributedDataParallel gives a benefit over a single GPU. The epochs in a training with 4 GPUs are 4x shorter (because each GPU works with only 1/4 of the dataset) but we need 4x the amount of epochs to get the same result.

Additionally, your repo has an arg average_gradients. If you turn on this as a duplicate gradient averaging step, will it achieve the same accuracy as a single GPU?

The option average_gradients I added as a try to solve this issue. But since the gradients of all ranks are already synced, it has no effect and the gradients remain unchanged.

What about using DataParallel?

having the exact same issue, only monitoring training accuracy/loss. Also, training is slower that DataParallel and even single GPU. Wondering if/how you solved this. On a related note, would really appreciate a pointer to a detailed discussion/documentation of DistributedDataParallel… so far, I’m learning by making mistakes since the tutorials don’t seem to cover it comprehensively (or I haven’t found them yet).

The epochs in a training with 4 GPUs are 4x shorter (because each GPU works with only 1/4 of the dataset) but we need 4x the amount of epochs to get the same result.

With DataParallel this issue doesn’t occur.

Putting these two together, looks like the loss function might play a role here. With DDP, the gradient synchronization only occurs during the backward pass after loss computation, which means that each process/GPU independently computes the loss using its local input split. In contrast, DataParallel does not have this problem, as forward output is first gathered and then the loss is computed over all input data in that iteration. Will this make a difference in your application?

Another thing is that, when switching from single GPU to DDP-based multi-GPU training, you might need to tune the configs like learning rate to get the best result. See discussions in this post: Should we split batch_size according to ngpu_per_node when DistributedDataparallel

Past weeks I ran a few more tests, but I still wasn’t able to solve this issue. Here are some training results with different batch sizes and learning rates: 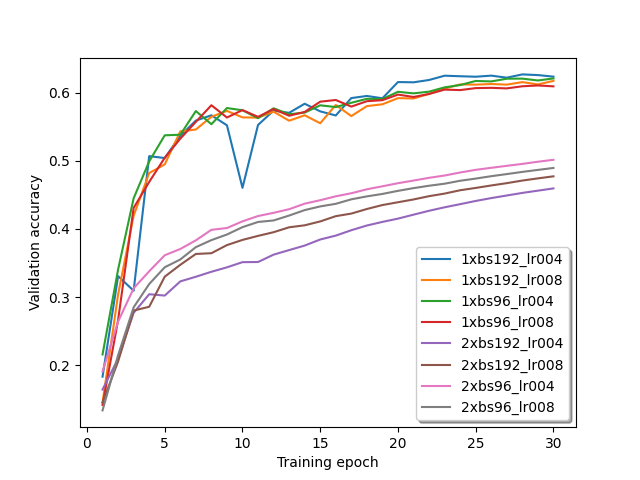 I also tried the ratios of the learning rate and batch size between single GPU and multi GPU training suggested by @wayi . The single GPU curve is still always ahead of the multi GPU curve.
Am I still missing something or is DistributedDataParallel just not working properly? Can please someone confirm its actually possible to achieve a similar progression of the validation accuracy in multi-GPU training using DistributedDataParallel compared to a single GPU training?