I have investigated the problem:

One possible explanation is the one of https://github.com/pytorch/pytorch/issues/3022 large power variation causing crashes. I ran my program with a finer image resolution in order to have a constant 100% utilization of the GPU and I got a huge increase in power consumption (still with large power variation) but I experienced no crash. Since the crash appears after a random time up to 6 hours, maybe I have just not waited long enough.

Do you think this is the explanation ? The more Powerful PSU on this computer is in fact more sensible to power variations and shuts off. Do you think it is a software problem with Cuda 8 and pytorch 0.4 ?

EDIT: Add a plot the temperature for a training that crashed 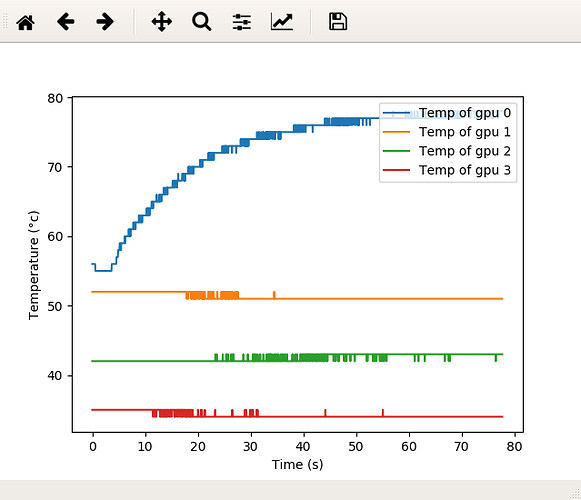 Did you ever solve this problem? I have a similar error where my computer restarts shortly after I start training. I have a 750w psu and only 1 gpu (1080ti) so I don’t think it is a power problem. Also, I did not see an increased wattage going to my gpu before it restarts.

No, I have stopped using that computer and used another one with Ubuntu 16.04 and Cuda 9.1. I never experienced a similar crash with this computer.

I think it was a specific hardware / driver / cuda compatibility issue.

I have a similar problem with a RTX 2080ti using cuda 10.1 and a 1100W power supply, it randomly crash after a couple seconds of training on the GPU.

Hi,
I have same issues. check this link

Did you find a fix?

I have same issue with the same GPU and Cuda.
Did you find a fix?

I was facing similar issues. Even with small batch sizes in Pytorch the computer would reboot by itself. I removed a gpu but still no solution. I did the following and all my problem was solved.

These settings are for the RTX 2080TI. Edit according to your own gpus.

Since limiting the power limit and clocks seems to help, I would also suggest to check the PSU as it seems to be too weak or faulty.

Thanks, I gonna check it.