I’m transferring a Caffe network into PyTorch. However, when I’m training the network with exactly same protocol, the training loss behaves like this: 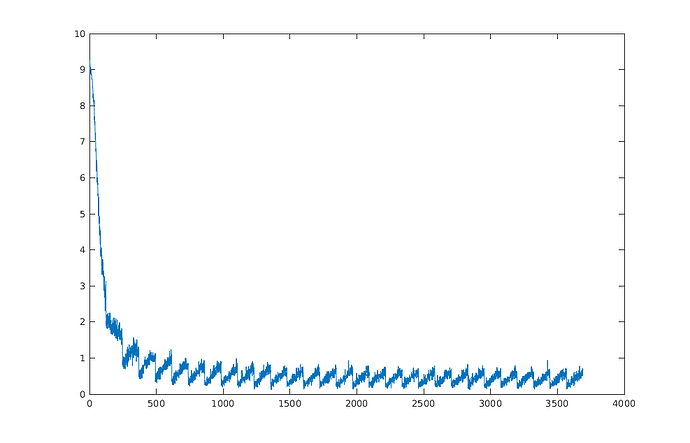 The loss increasing within each epoch and decreases when starting a new epoch. Thus forms this sawtooth-shaped loss.

and in class Net:

i dont think this is because of momentum. It is probably because of the way new samples are selected in the dataset.

PyTorch selects samples from dataset without replacement.
Which means, at the beginning of a new epoch, it is likely that you saw a sample in training set that you saw at the end of the last epoch. But over the epoch, you will never see a repeated sample.

Caffe probably samples with replacement, which means it is equally likely to see the same sample at any part of the epoch.

To verify this theory, you can write a with-replacement sampler, and see if that removes the sawtooth-shape from the loss:

I have observed the same loss pattern on an automatic speech recognition task using the default PyTorch dataloader (sampling without replacement). Applying instead the with-replacement random sampler suggested by @smth removes the pattern, as would be expected.

Drops at the interface between two epochs could be expected simply due to seeing samples which have already been fitted again for the first (or second or third or …) time. This could indicate that we are indeed learning to better classify that specific sample. However, the reason for the increasing trend in the loss during a single epoch evades me.

One line of thought is that fitting to the examples in the first batch of an epoch worsens the model performance on any other examples in the training set; and so forth for all batches of an epoch. However, wouldn’t this be expected to result in an increasing validation loss? Aren’t we in a sense overfitting to each training example during the epoch?