What is the theoretical reason for the default way of Pytorchs weight initialization?

In the source code “kaiming_uniform” appears. However, to my understanding Kaiming He at al. [1] suggest sampling from a normal distribution. If I take the condition they state that 0.5 * no_features * VAR[w_l] = 1 and plug in the variance for the uniform distribution which should be (b - a)^2 / 12, with a= - sqrt(k) and b=sqrt(k), this does not add up either.

Thanks for any help

I think this thread and its references can answer your question.

Clarity on default initialization in pytorch

According to the documentation for torch.nn, the default initialization uses a uniform distribution bounded by 1/sqrt(in_features), but this code appears to show the default initialization as Kaiming uniform. Am I correct in thinking these are not the same thing? And if so, perhaps the documentation can be updated? Does anyone know the motivation for this choice of default? In particular, the code appears to define a negative slope for the subsequent nonlinearity of sqrt(5), whereas the default…

Feel free to ask if it did not help.

Thank you so much, this brought a lot of clarify!

With the Uniform distributions variance being Var[W] = (1/12)* (b-a)^2 the way the weights are initialized for nn.Linear seems to fulfill Eq. 15 in [Xavier] which states that it should be n*Var[W] = 1/3
Isn’t the weight initialization thus Xavier?

In Xavier uniform weight init which you can find in eq.16 of the paper you have referenced and also PyTorch docs: 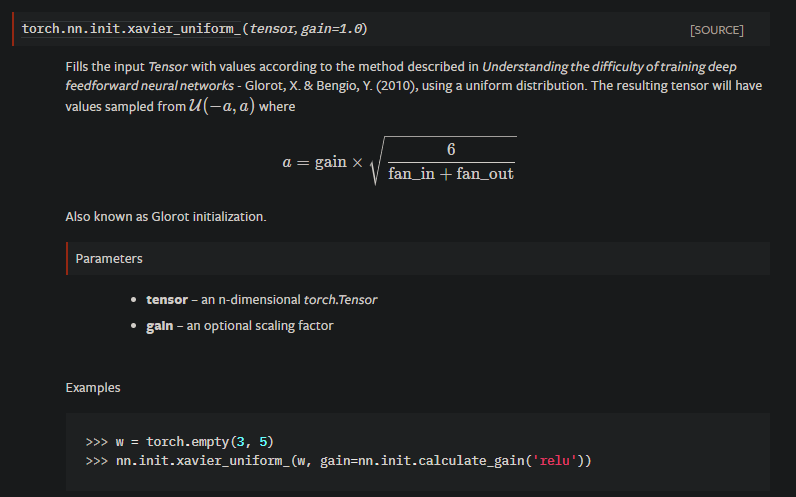 Where in the paper, the target activation function was ReLU which has gain=1. Based on this, default weight init of Linear or Conv layers in PyTorch where follows Kaiming He uniform but the gain and negative slope has been defined in a way that it is a simple uniform as the way it has been explained in the thread I posted first. 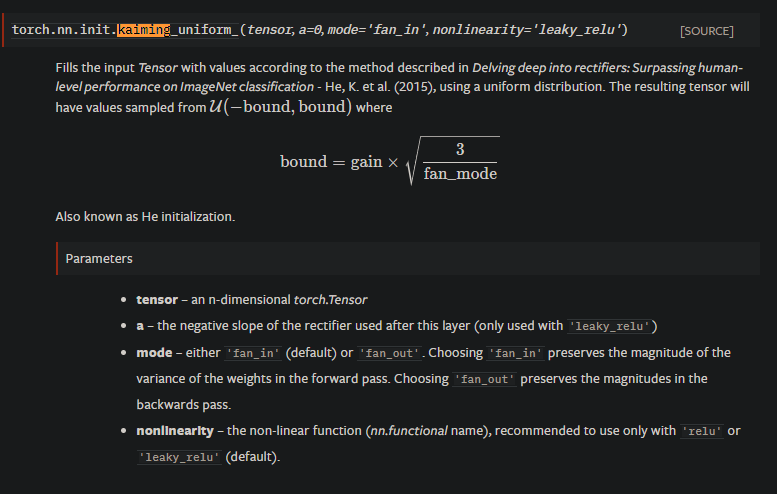