I’m using an LSTM to predict a time-seres of floats. I’m using a window of 20 prior datapoints (seq_length = 20) and no features (input_dim =1) to predict the “next” single datapoint. My network seems to be learning properly.

Here’s the observed data vs. predicted with the trained model: 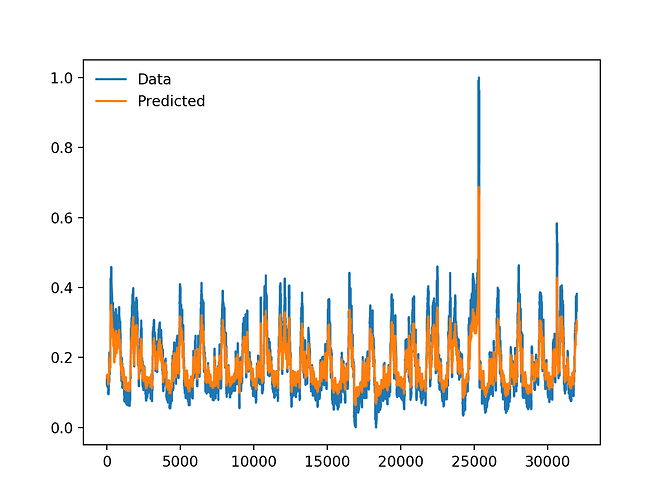 Here’s a naive implementation of how to predict multiple steps ahead using the trained network:

When I do this the predictions recurrently for the last 20 observations (which at some point include only predicted values) I get: 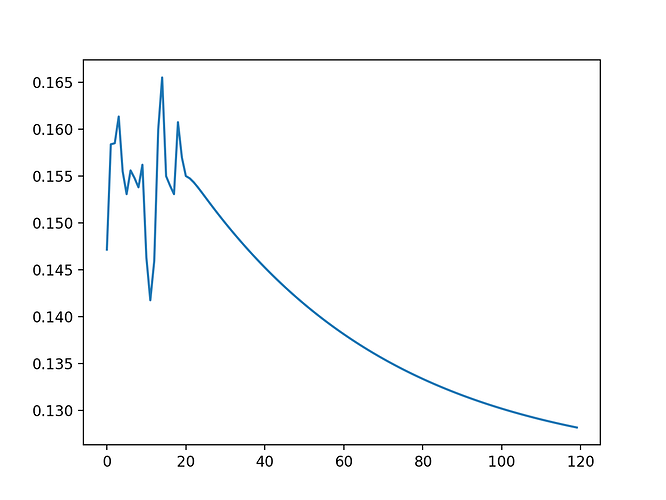 Somewhat orthogonal to your question, looks like your time series is cyclical? Have you considered adding a couple of input features, that represent the cyclical time, ie/eg:

Yes definitely a strong cyclical component, I was thinking of using one hot vectors for time but your approach looks better, thanks for the suggestion.

Very interesting. So retrain the same model, or use it as input for a second model? Would you mind providing a rough pointer of where to look for the code you suggest? I searched and couldn’t find anything specific along these lines.

The PyTorch official tutorials have one which mentions this training (teacher forcing) and how to train against its own distribution: http://pytorch.org/tutorials/intermediate/seq2seq_translation_tutorial.html. Note that even though this is seq2seq it is relevant for you as well.

I’ve seen teacher forcing thrown around quite a bit, thanks for pointing me in this direction.

Regardless of the teacher forcing (re)training, does the implementation of prediction of future values I posted in the OP look fine to you?

Looks like a sensible way of feeding in the data to me, though it would be best to follow some PyTorch tutorials on using RNNs to see what the convention is.

Are you using nn.LSTM by looks of it? U would want to use nn.LSTMCell for this

Just out of curiosity, what is difference, and difference in use-case, between LSTM and LSTMCell?

I think LSTMCell = do your own timestep, LSTM = pass the entire sequence. Usecase: use LSTM unless you have a reason not to, reasons are things that LSTM/cudnn don’t support, e.g. attention, teacher forcing. The OpenNMT-py uses both in en- and decoder.

Thanks for the pointer.

LSTMCell is an unrolled lstm. And what you want here is a stateful lstm which is much more easily made using an LSTMCell

Hi,
So, I had lots of trouble with this issue few months ago for my PhD.
To be exact, what I had is lots x, y of a pen trajectory (continuous data), drawing letters. I have all the alphabet recorded for 400 writers. What I wanted to let the LSTM (GRU in my case) generate letters. Straightforward? Not at all!

In short, my advice is (if you need something quick):

If you have time, I suggest you look at ‘Alex Graves’ approach (I would love to see an implementation for this MDN in pytorch).

Great post, thanks for all the references and ideas!

I’ll have to look carefully at them but just as a first thought, looks like discretizing a time-series would represent data at each timestep as a one-hot vector (indicating the discrete bin where the real value falls). So instead of having a timeseries I would have a grid of T x R, where T is the set of timesteps and R is the number of the discrete steps that partition the range of my time series. Thoughts?

That looks good to me.
I recommend you take a quick look at Karpathy blog and the way he present the data to the network and how he samples from the network, it should clarify any ambiguities you’ve about this issue (it is a fun and interesting read)

hardmaru reimplemented the MDN stuff from one of his earlier blogposts in PyTorch: https://github.com/hardmaru/pytorch_notebooks/blob/master/mixture_density_networks.ipynb

How you have set up you have your only using the LSTM to changes from one data point to the next data point in that sequence. But doesn’t get any information about the sequences before it. Hence the cell state needs to be input for sequence to sequence in order to take full advantage of LSTM so that LSTM encompasses not just what happens from 1 step to the 20th step of data point in 20 datapoint sequence but encompasses all the datapoints from 1 to 30,000 whatever number of original datapoints you have. Hence the data can not be parallelized and cannot be shuffled as the output from each point is needed before training on next input and output.

I hope that helps