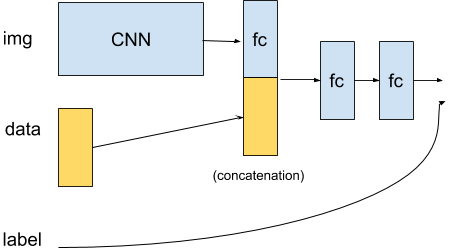 How should I code that?

Here is a small example for your use case:

I chose random values for the linear layers, so you should use your constrains like additional_data_dim.

33 Likes
NN with different types of Input
Concatenating observations that include image, pose and sensor readings
How to combine tabular and image data?
Write dataset class to have 2 dataset output
How to cat layer with batch_size of 1 to a larger batch?
Raul_Gombru (Raúl Gombru) June 29, 2018, 1:23pm #3

Thank you! Understood, working on it!

hello, if I would I have two models and I want to concatenate the last layer, so the last layer is shared. can I use the same approach ?

Sure!
You would have to pass your input(s) through both models and concat the outputs before the final layer.

Here why does it set dim as 1 in torch.cat function? I think it would be 0?

Dim 0 means that you treat the outputs as independent batch samples since you increase the batchsize. However, this is probably not what one would want in this case,since the results of both models belong to the same sample.

Thanks for the reply. Dim 0 means batch dims same as keras. Your reply helped me a lot

RuntimeError: invalid argument 0: Sizes of tensors must match except in dimension 1. Got 13 and 26 in dimension 2 at c:\programdata\miniconda3\conda-bld\pytorch_1533096106539\work\aten\src\th\generic/THTensorMath.cpp:3616

Why did you provided the code

self.cnn.fc is the “classifier layer” of the inception_v3 model.
I just replaced it with my own linear layer to change the number of output neurons.

The model is used in x1 = self.cnn(image). self.cnn.fc is thereby called inside the forward of the inception_v3 model: line of code.

I am also trying to concatenate two tensors to use as input to a linear layer. Each tensor is the output of a subnetwork that independently processes two input tensors. I am getting the following error:

I suspect the error has to do with the temporary assignment of a variable to hold the concatenated data x3 = torch.cat((x1, x2), dim=1). The network is defined below:

It looks like you have a typo and use self.fc5 twice.
However, even if you do, it should work.
Could you change that and run it again?

Thanks for the response. I fixed the typo, and I am still receiving the same error message.

RuntimeError: Trying to backward through the graph a second time, but the buffers have already been freed. Specify retain_graph=True when calling backward the first time.

Here is my training loop:

Yeah, I thought so, since reusing a module shouldn’t throw this error.
I made some assumptions about your code to reproduce the issue. Could you check, if the shapes and criterion are right?

This code works on my machine. Are you using a custom criterion?

Yes, you are correct. The code you provided does run. I took my training loop and replaced the data coming from the torch.utils.data.DataLoader (train_loader) with a hardcoded random tensor:

This eliminates the error message. So, it must have something to do with the way I am getting data out of the DataLoader. Looks like it’s not a problem with the concatenation step!

The problem actually seems to lie in an earlier embedding layer that I used to generate the input data that is fed via the DataLoader:

In my case, this problem is solved by removing the autograd by calling detach():

In any case, thanks for the quick help!

Hi!
Solved!
Just had to indert the two databases to the dataset as:

Thanks for the answers. I have a followup regarding Datasets for these kind of networks.
I have two Data sets I’m working with, one is a time-series and the other is continues and binary data. Each training example has one of each.
I would you recommend building a Dataset that can be used for a network that has concat in it? It seems that all the examples on Datasets work with only one kind of input.

Hi @ptrblck Considering this post of yours, where you can concatenate different nn’s “bodies” before the final layer by using torch.cat(…), may I know what other methods are there available?

I guess @ptrblck I was thinking lstm-ish and the logic of its gates. Does cat-ing and dense-ing different “bodies” does under the hood “gating”? Does min or mean similar shapes “gates” more than what dense-ing does? I guess I find lstm’s, and nn’s in general, fascinating.